SEOUL, Dec. 10 (Yonhap) -- Nearly half of South Korean adults are in favor of North Korean leader Kim Jong-un making an address at the National Assembly if he comes to Seoul, a poll showed Monday.

The survey of 503 South Koreans nationwide by local pollster Realmeter showed 46.7 percent of respondents consenting to Kim's speech at the South Korean parliament, with 40.2 percent expressing the opposite view.

The poll has a margin of error of 4.4 percentage points, with a 95 percent confidence level. The favorable opinion for Kim's parliamentary address was dominant within the margin of error. 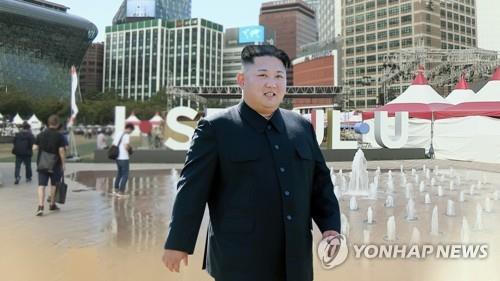 More than 70 percent of liberals were in favor and the address, and nearly 70 percent of conservatives opposed Kim's Assembly address.

By age, more than half of respondents in their 30s and 40s expressed agreement, whereas people in their 60s were predominantly opposed. Those in their 50s were evenly split.

A separate Realmeter poll released on Thursday showed that more than six out of 10 South Koreans are in favor of the North Korean leader visiting Seoul.

In the Pyongyang summit agreement in September, Kim agreed to visit Seoul "at an early date," which President Moon Jae-in says means within this year.

But the prospects for his trip in 2018 are uncertain as North Korea's denuclearization talks with the United States have made little progress.