The Korea Institute for Defense Analyses (KIDA) recently formed a task force for the defense reform "Plan B." It is separate from the ongoing Defense Reform 2.0, which has been mapped out without a specific peace regime in mind.

"We believe that there is a need to carry out research on a future military force structure in preparation for (potential) changes in the security situation," Choi Hyun-soo, the ministry's spokeswoman, said during a regular press briefing.

"I understand that the KIDA task force was formed in October or November, and I think that research appears to be in its early stage," she added. 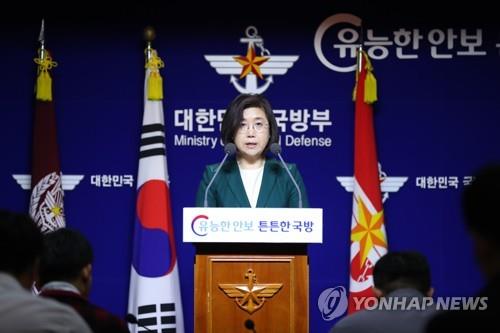 Choi dismissed a news report that Plan B will be presented to the presidential office Cheong Wa Dae on Thursday next week.

"There isn't any reporting on Plan B in our plan for the presidential briefing," she said, noting that the briefing will be about the existing defense reform initiative aimed at creating a smaller, smarter military.

The research comes amid growing inter-Korean military efforts to reduce tensions and build trust through a number of conventional arms control measures.

Speculation has persisted that Seoul's aggressive plans for military buildup and exercises could be watered down to reinforce ongoing diplomacy to denuclearize North Korea and establish a lasting peace regime on the peninsula.