SEOUL, Dec. 10 (Yonhap) -- Masuo Omura, a professor emeritus at Japan's Waseda University, has for decades spearheaded the study of modernization-era Korean literature in Japan, and his efforts culminated in the discovery of the forgotten tomb of the beloved Korean poet Yun Dong-ju in China some 30 years ago.

The senior scholar was one of the translators commissioned to compile eight key Korean novels into the Japanese-language collection of selected modern Korean literature in a joint project by the Japanese publishing company Heibonsha and the Literature Translation Institute of Korea.

As the final part of the series, "Hometown," a colonial-era novel by late Korean writer Lee Gi-Young and translated by Omura, was published in Japan 2017, for which the Japanese scholar was this week awarded the Korean culture minister's award for best translated Korean literary work.

"This is my first prize from the government of South Korea. I am honored and delighted," Omura said in a press conference on Monday. 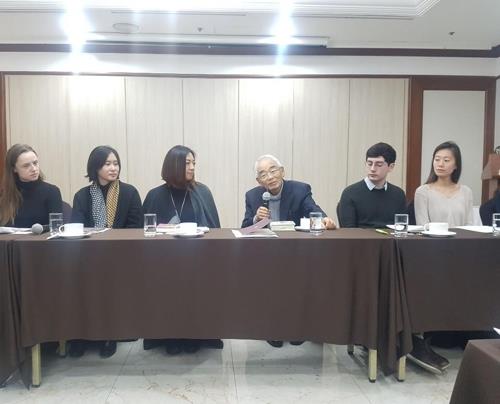 His translated works of early-modern Korean literature are of little commercial value in Japan, with hardly any of them sold to general readers. "But I do not seek sales as I pursue (Korean literature). I have been working so far with a belief that someday, in 10 years or 100 years, somebody may want to study (Korean literature) based on my books," he said.

South Korea launched the translation award in 1993 as a biennial event before turning it into an annual ceremony in 2003 under the institute. The culture minister's award for the best translated Korean literary work was established this year as the Korean government added efforts to promote Korean literature worldwide.

A total of 167 Korean literary works, translated into 29 foreign languages and published in 2017, competed for the award.

Janet Hong, a long-time translator living in Canada, won the award for best translation work, in the name of the Literature Translation Institute of Korea's chief, for her English rendering of writer Han Yu-joo "The Impossible Fairy Tale."

The same award also went to Lidia Azarina, who translated Han Chang-hoon's "I Like It here."

"The Impossible Fairy Tale" is Hong's first translation of a full-length Korean book.

"When I first started out as a translator (15 years ago), K-pop and Korean drama used to be something only for Koreans, but now it is a completely different environment," she said, adding that the global growth of popularity of Korean culture led to increased interest in Korean literature as well.

The Korean agency also recognized the French publishing house Editions Philippe Picquier and German journalist Katharina Borchardt for their contributions to translated Korean literature. They were both given best achievement awards.

A total of 186 translated works in seven languages competed for the category for novice translators, according to the Literature Translation Institute of Korea.