SEOUL, Dec. 10 (Yonhap) -- A Seoul taxi driver died after setting himself on fire in front of the National Assembly on Monday, apparently in protest of the planned launch of a ride-sharing service by a local information technology enterprise.

The driver, identified only as 57-year-old with the surname Choi, sprinkled flammable materials on his body inside his car and committed self-immolation in front of the Assembly's entrance at around 2 p.m.

Choi was rushed by police and firefighters to a nearby hospital but died at 2:49 p.m.

According to his acquaintances and police, the driver burned himself to death to oppose Kakao Corp's plan to launch a commercial carpool service in South Korea. 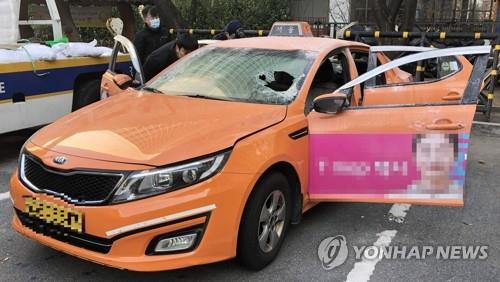 Choi reportedly notified his acquaintances of his self-immolation plan beforehand.

The incident occurred as Kakao Corp. launched a commercial carpool service on a trial basis on Friday ahead of its formal launch slated for Dec. 17.

Four labor unions representing the drivers held a press meeting later in the day, urging the government to take actions in support of the industry.

A union official released to the media part of Choi's suicide note, in which he slammed Kakao for running an "illegal carpool" and called for government efforts to resolve the situation.

The labor unions said they will strenuously fight to protect their work if the government does not accept their requests and lets Kakao start the service.

In late November, tens of thousands of taxi drivers staged a protest rally near the National Assembly against Kakao Corp.'s commercial carpool service, calling for the swift passage of a revised bill that would ban its entry onto the market.

Members affiliated with four taxi industry associations and labor groups joined the demonstrations in what they called "a resolve for survival."

The rally was their second massive protest following a nationwide stoppage and demonstrations by some 60,000 taxi drivers on Oct. 18.

They oppose the planned launch of Kakao T Carpool, a ride-sharing service designed to connect ordinary drivers to passengers during the morning and evening rush hours. Taxi drivers claim the top mobile messaging company's service would kill the industry.