SEOUL, Dec. 10 (Yonhap) -- South Korea's bourse operator on Monday began looking into accounting fraud by Samsung BioLogics Co. to decide whether the company's stocks can be traded on the local market, officials said.

The six-member Corporate Review Committee under the Korea Exchange (KRX), comprised mostly of outside experts, including a lawyer, a professor, and an accountant, held their first review session at 2 p.m., the officials said, adding that the final ruling on the fate of the bio firm on the KOSPI market could be released within the day, at the earliest, although the ruling is likely to take more time.

The meeting came after the country's financial regulator, the Financial Services Commission (FSC), ruled on November 14 that Samsung BioLogics intentionally violated accounting rules ahead of its initial public offering in 2016.

The FSC decision led to the instant halt to the trading of the bio firm's shares on the KOSPI bourse.

In the worst-case scenario, the KRX committee could decide to remove the company from the stock market. Or it may choose to allow the country's second-largest bio firm to resume trading of its shares. Observers also say it may give a nod with strings attached, such as the suspension of the share trading for a certain period of time, so Samsung can make amends for its accounting error.

"The committee will make a decision while taking various aspects into account in a fair manner," said Jung Ji-won, head of KRX, during a press meeting earlier in the day.

"I think it is not desirable to let market uncertainties (surrounding the issue) continue for long," he stressed.

Under the rules of the bourse operator, the deadline for the decision on the legitimacy is Dec. 31. The deadline can be extended by one month.

The regulatory review centered on questions about Samsung BioLogics' sudden profits in 2015 after years of losses. Samsung BioLogics reported a net profit of 1.9 trillion won (US$1.68 billion) that year after changing the method used to calculate the value of Samsung Bioepis, which is a joint venture with the U.S.-based Biogen Inc.

Samsung BioLogics has claimed that the change in accounting methods was in line with international accounting standards. 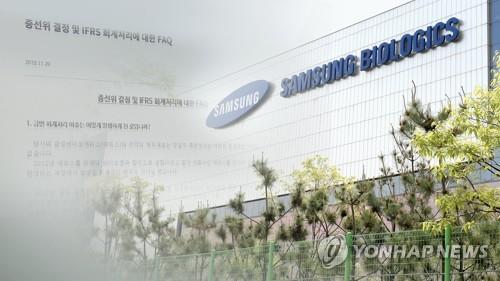