The slugger for the Doosan Bears was one of three outfielder winners at the year-end Golden Glove Awards hosted by the Korea Baseball Organization (KBO).

In November, Kim was voted the regular season MVP after leading the KBO with 44 home runs and 133 RBIs in 139 games. It was the first MVP honors for the 30-year-old in his eighth season. Kim was also among the leaders in other categories, including on-base percentage, slugging percentage, runs scored, hits and batting average.

The left fielder won his first Golden Glove in 2016. 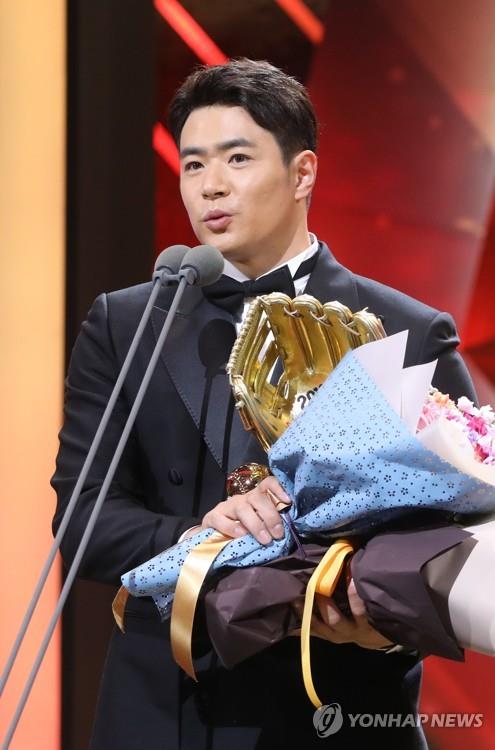 Baseball writers, broadcasters and analysts cast their votes last week. Despite the name's connotation, Golden Gloves have been usually presented to players who put up the best offensive and pitching numbers, instead of the best defensive players. In addition to the nine fielding positions, the KBO also hands out Golden Gloves to designated hitters. League leaders in major offensive and pitching categories all earned automatic nominations. 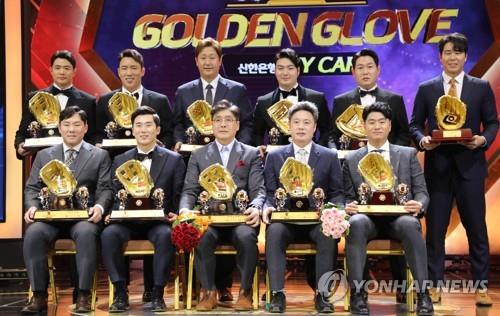 In the outfield category, players were awarded Golden Gloves regardless of their positions. Lotte Giants' center fielder Jeon Jun-woo, who led the KBO with 190 hits and 118 runs scored, and Nexen Heroes' left fielder Lee Jung-hoo, third in the batting race with a .355 average, were the two other winners.

The Giants' veteran Lee Dae-ho won his first Golden Glove as DH and his sixth overall. Lee is the third player to win a Golden Glove at three different positions, having won four times as first baseman and once as third baseman.

The Bears' batterymates, starter Josh Lindblom and catcher Yang Eui-ji, each captured a Golden Glove. It was Lindblom's first and Yang's fourth. Yang led all players by earning 331 out of 349 votes.

Lindblom, who finished second in the MVP voting, won the ERA title at 2.88 and tied for second with 15 victories. Lindblom is the sixth foreign pitcher to win a Golden Glove since the KBO opened the doors for imports in 1998.

Considered the KBO's most complete catcher, Yang enjoyed his most productive offensive season -- he was second in both batting average (.358) and on-base percentage (.427) -- while playing his usually stout defense behind the plate. Yang led the KBO by throwing out 37.8 percent of would-be base stealers and committing just three errors.

Yang, 31, is a free agent this winter who could command a lucrative multiyear deal. 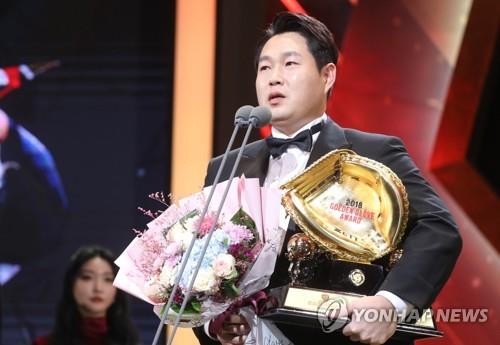 In the infield, the Heroes' first baseman Park Byung-ho grabbed his fourth Golden Glove, and first since 2014.

After rejoining the Heroes this year, Park, the 2012 and 2013 regular season MVP, didn't miss a beat: He led the league in on-base (.457) and slugging percentages (.718), and finished just one behind Kim Jae-hwan with 43 homers despite being limited to 113 games due to injuries.

An Chi-hong of the Kia Tigers won his second straight Golden Glove and his third overall. An led all second basemen with 118 RBIs and a .342 batting average, both new career highs.

The Bears' third baseman Heo Kyoung-min was rewarded with his first Golden Glove after putting together his best offensive season. The 28-year-old batted a career-high .324, and reached the double figures in home runs for the first time with 10. He also set new personal highs in hits (167), doubles (30) and steals (20).