SEOUL, Dec. 10 (Yonhap) -- The SK Wyverns became the first South Korean baseball champions to be shut out at the Golden Glove Awards on Monday.

The 2018 Korea Baseball Organization (KBO) champs left the season-ending awards ceremony empty-handed. The Golden Gloves have been awarded since the KBO's inaugural season in 1982, and the Wyverns are the first Korean Series champs not to produce a winner.

The Golden Gloves are often awarded to the best offensive players at each position, while pitchers earn these awards based more on their excellence on the mound than on their fielding prowess. The KBO created a Golden Glove category for designated hitters in 1984. 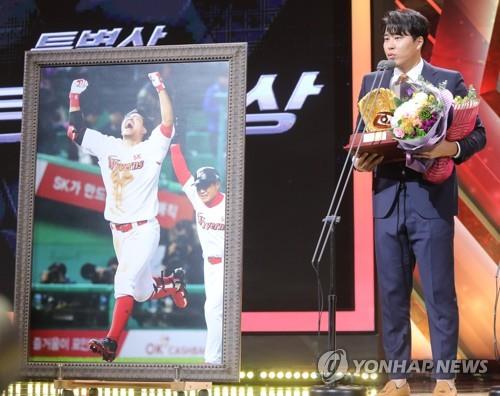 Four SK players finished second at their respective positions in the voting by baseball writers, broadcasters and color commentators.

At pitcher, left-hander Kim Kwang-hyun was a distant second to the winner, Josh Lindblom of the Doosan Bears. Lindblom, the league's ERA champion, earned 245 of 349 votes, while Kim had just 50 votes.

Kim's batterymate, Lee Jae-won, collected 11 votes to finished second in the catcher category. Yang Eui-ji, a free agent catcher who played for the Bears in 2018, garnered 331 votes, more than any other player at this year's awards.

At first base, Canadian slugger Jamie Romak picked up 71 votes to rank behind Nexen Heroes' Park Byung-ho, who had 255 votes. Romak and Park both belted 43 home runs to tie for second in the KBO, but Park did so in just 113 games, 28 fewer than Romak.

At third base, five-time winner Choi Jeong had 101 votes to come in second place behind Heo Kyoung-min of the Bears, who won his first Golden Glove with 210 votes.

SK's right fielder Han Dong-min was fifth with 102 votes. Han did get a consolation prize of sort with the Golden Photo Award.

It's annually presented to the player who produced the most memorable moment of the season. Han blasted a game-winning solo home run in the bottom of the 10th inning of Game 5 of the penultimate playoff round against the Heroes, clinching an 11-10 victory for the Wyverns and sending the club to the Korean Series.

In the award-winning shot, Han is screaming for joy as he crosses home plate with both arms raised. Unfortunately for the Wyverns, there was no other cause for celebration on this night.