(ATTN: ADDS executive's comment in 3rd para and details throughout)

Hyundai's sedan-focused lineup had few competitive SUV models. So it has stepped up efforts in recent years to diversify its lineup with new SUV models to meet rising global demand.

"The Palisade will be a strong challenger to existing large SUVs though it has arrived late in the crossover market. The company has developed the new flagship model in the past four years to make it the best SUV in the markets," Hyundai Motor Executive Vice President Lee Kwang-guk said in a media test-drive event in Yongin, just southeast of Seoul.

The company said it has received 20,506 preorders for the Palisade in the past 10 days helped by its "reasonable" prices, Lee said.

The Palisade comes with an eight-speed automatic transmission with a choice of a 2.2-liter diesel engine or a 3.8-liter gasoline mill. It is priced at 36 million won-42 million won (US$31,000-$37,000), Hyundai said in a statement.

The new SUV boasts nine air bags, spacious eight-passenger seating with high-end materials used throughout the cabin, advanced convenience and safety features, and ample cargo space, even with the third seats in place.

Hyundai plans to launch the all-wheel drive and three-row Palisade, named after the Pacific Palisades, an affluent and beautiful neighborhood in southern California, in the U.S. market in the summer of 2019.

Hyundai expects the addition of the Palisade to its crossover lineup, currently composed of the subcompact Kona, compact Tucson and midsize Santa Fe, will improve sales across the board.

From January to November, Hyundai sold 4.18 million vehicles, down 1.9 percent from 4.1 million units a year earlier due to weak demand in major markets, such as the United States and China. 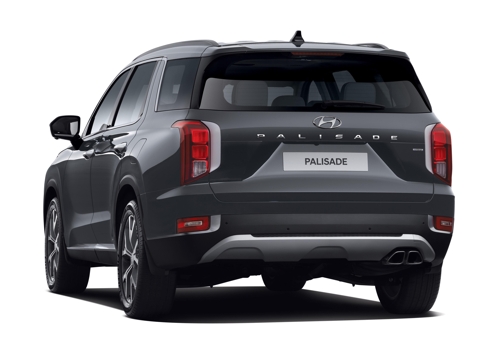