Yoo Eun-hae, the education minister and deputy prime minister for social affairs, made reports to Moon at the government complex in the administrative city of Sejong.

It was followed by a discussion about how to overhaul the education ministry and boost confidence for public education and ways to set up a level playing field to become an inclusive nation.

"The division is preparing for ways to strengthen kindergartens' public role and increase classes of state and public kindergartens, as well as to improve education services following the revelation of irregularities at private kindergartens," a presidential official said.

Moon and labor ministry officials had discussions over ways to innovate a labor safety net for the underprivileged and changes in life under the 52 hour per week work system.

"We have not succeeded in increasing the number of jobs, while the quality of some positions may have improved," Moon said during the briefing. "The government has to show visible results starting next year."

The president also met with officials at the ministry's labor standard policy division in charge of cutting working hours and hiking the minimum wage. 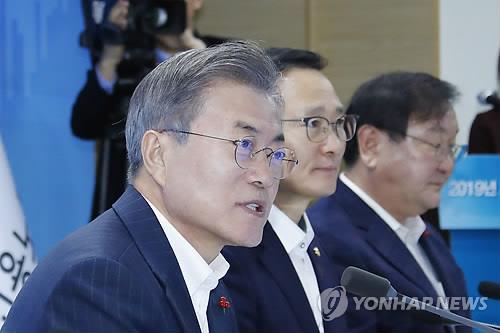