SEOUL, Dec. 11 (Yonhap) -- The Supreme Court has ordered a Seoul university professor to pay 5 million won (US$4,430) in compensation to the family of former President Roh Moo-hyun for defaming him in a school exam, court officials said Tuesday.

The top court made the ruling while upholding an appellate court ruling, which said academic benefits cannot be achieved by poking fun at the suicide of a public figure.

The defendant, identified only as a Hongik University professor with the family name Lyou, was accused of defaming the former president by inserting an English sentence in a school exam in 2015, which read "Roh was 17 years old and his I.Q. was 69. He suffered brain defects resulting from jumping from the rock of the Owl when he was six." 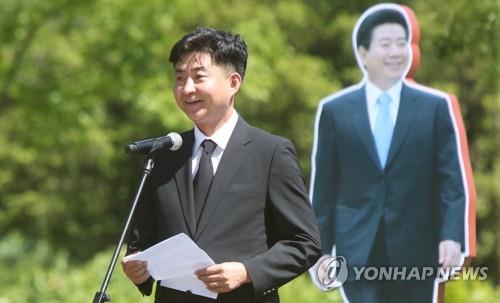 Roh jumped off a cliff to his death behind his retirement home in May 2009, a year after leaving office, amid a widening probe by prosecutors over allegations that members of his family accepted illicit funds.

A district court rejected the suit the following year, saying that the professor's academic freedom should be protected.

But an appellate court issued a different verdict, saying the professor's act of mocking the method of Roh's death cannot be protected by academic freedom.

Approving the appellate court's ruling, the Supreme Court said that Lyou's exam sentence cannot be viewed as an act of exploring the truth from an academic perspective.
(END)