The 31-year-old agreed to a four-year deal worth 12.5 billion won (US$11.1 million) with the NC Dinos. The Korea Baseball Organization (KBO) club announced the deal, which includes a signing bonus of 6 billion won. Yang made 600 million won in 2018.

Yang is now the highest-paid catcher in the KBO, and the contract is the second-most lucrative one handed to a KBO free agent, behind the 15 billion won deal that Lee Dae-ho signed with the Lotte Giants in 2017 in his return from the Seattle Mariners.

Yang spent his first 10 seasons with the Doosan Bears and won two Korean Series championships with them. The Bears finished first in the regular season this year, and now Yang is now joining the lowest-placed team from the 2018 season.

"I've decided to challenge myself in a new setting, and I will not be content with myself and I will try to keep getting better," Yang said in a statement released by the Dinos. "I want to thank the NC Dinos for giving me this opportunity. I also want to thank the Doosan Bears for helping me become the player that I am today."

Yang has been long considered the most complete catcher in the KBO, with a rare blend of offensive skills and defensive prowess behind the plate.

He is a career .299 hitter with five 20-homer seasons under his belt. Yang won the 2016 Korean Series MVP when the Bears cruised to their second straight championship.

Though it's difficult to quantify, pitchers have raved about Yang's game-calling abilities. Dustin Nippert, former MVP-winning ace for the Bears, has said he has learned not to shake off Yang because he gave up a hit almost every time he did. 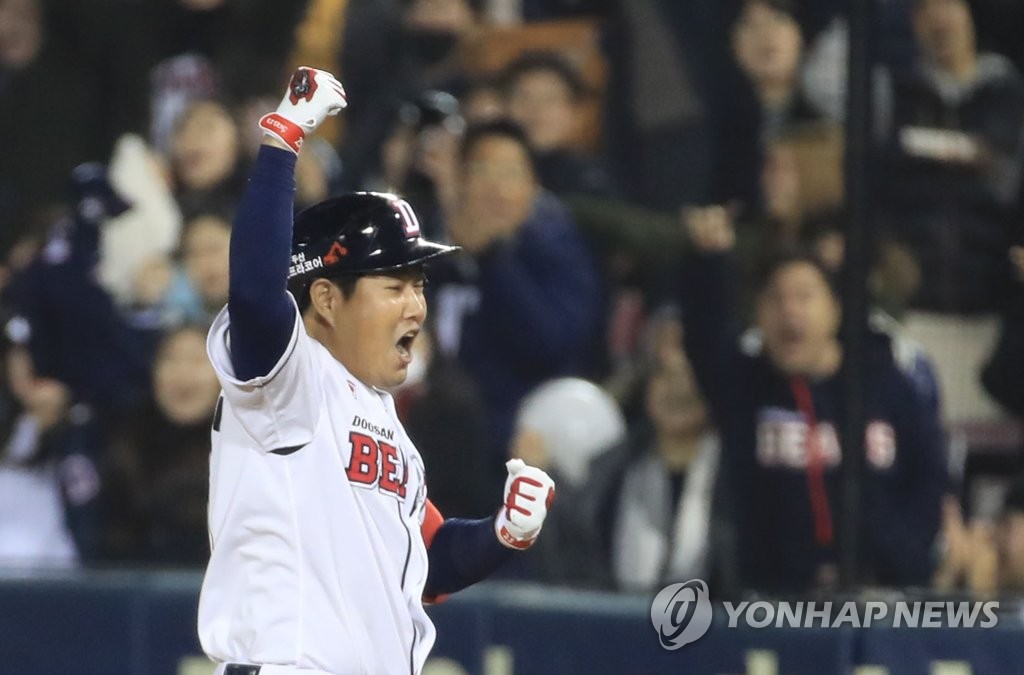 Yang is coming off perhaps his best overall season. He ranked second in the KBO in both batting average (.358) and on-base percentage (.427), and threw out 37.8 percent of would-be base stealers to lead all catchers.

With their former starting catcher, Kim Tae-gun, serving in the military, the Dinos received the KBO's worst production from the catcher position. Their backstops combined for the league-low five home runs and 30 RBIs while batting an abysmal .175.

The Dinos shuffled through six catchers in 2018, and none of them batted over the Mendoza Line of .200.

The Dinos joined the KBO in 2013, and made the postseason every year from 2014 to 2017 before falling on hard times in 2018. They're moving into a new stadium next year, and their general manager, Kim Jong-moon, said it was time to open up the wallet and show their commitment to the fan base by making a bold investment.

"Yang Eui-ji isn't just a good catcher or a good hitter; he's a dominant player," Kim said. "Considering the development of our young pitchers and the way our team is shaping up, we decided we have to actively pursue this type of player. We'll take good care of him so that he can stay healthy and contribute to our team."

Yang is the second All-Star to bolt the Bears in free agency in as many winters. A year ago, outfielder Min Byung-hun signed a four-year, 8 billion won contract with the Giants after 11 seasons with the Bears.

Kim Hyun-soo, the face of the Bears for nearly a decade who left for the majors in 2016, didn't rejoin the Bears when he returned to the KBO for the 2018 season, instead signing with the LG Twins, the Bears' Seoul-based rivals.