SEOUL, Dec. 11 (Yonhap) -- South and North Korea will discuss organizing a joint march at the opening ceremony of the next Summer Olympics and fielding combined teams there, when they hold sports talks this week, a Seoul official said Tuesday.

Sports officials of the two sides are scheduled to meet Friday at the joint liaison office in the North Korean border city of Kaesong. It will be their first such meeting since early November. Sports Minister Roh Tae-kang will lead the South's delegation and his North Korean counterpart will be Vice Sports Minister Won Kil-u.

An official with the South's sports ministry said the 2020 Tokyo Olympics will likely dominate the agenda. 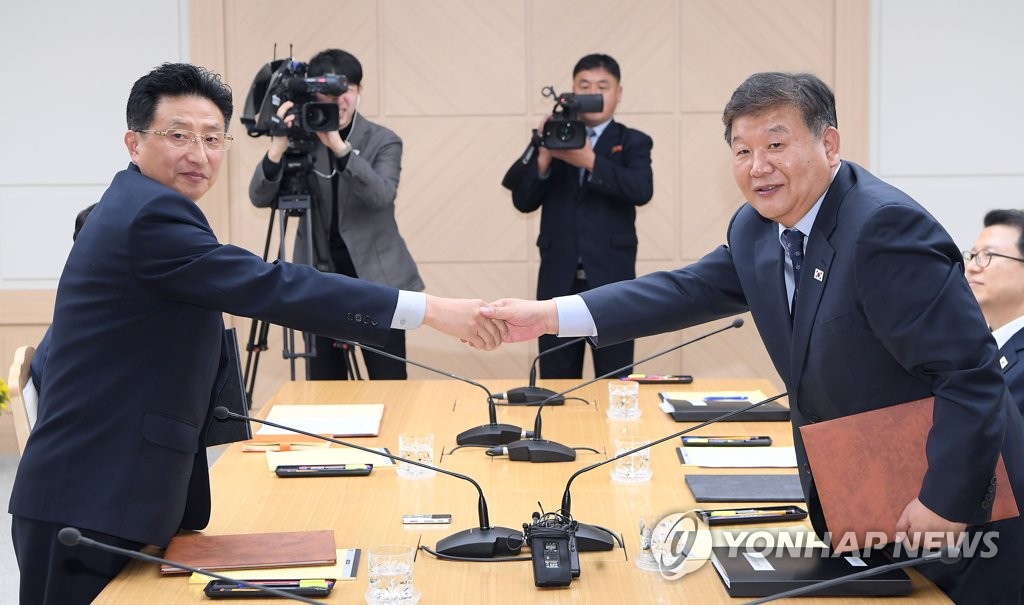 "Having unified teams and marching in together at the opening ceremony are the pressing issues," the official said. "We do have precedents with putting teams together, and so we're expected to reach agreements in areas where we don't have major differences. We'll also look to exchange all sorts of information."

The first round of the talks focused more on following up on a summit agreement to co-host the 2032 Summer Olympics.

The Koreas marched under one flag during the opening ceremony of the 2018 Winter Games in South Korea's PyeongChang in February. They also assembled a joint team in women's hockey, the first pan-Korean squad in Olympic history.

They followed that up with more unified teams in basketball, canoeing and rowing at the 2018 Asian Games in Jakarta and Palembang, Indonesia, and the all-Korean team captured gold in dragon boat racing, which is a canoeing discipline.

The Koreas have also competed together at international table tennis tournaments this year. They have agreed to compete as one Korea at the men's handball world championships in January next year in Germany.

The sports ministry official said the two sides haven't decided in which sports they'd like to combine their teams in Tokyo.

"I am sure North Korea has its list of sports," the official added. "We have to analyze competitiveness of athletes on both sides and also gather opinions from our athletes."

Once the Koreas settle on specifics of unified Olympic teams, they will also discuss holding joint training sessions in the buildup to the Olympics.