BEIJING, Dec. 11 (Yonhap) -- North Korean Foreign Minister Ri Yong-ho headed home from Beijing on Tuesday after a four-nation trip that took him to Vietnam, Syria, China and Mongolia over the past two weeks.

After arriving at the airport, Ri made no comments as reporters shouted questions, such as when North Korean leader Kim Jong-un is expected to visit Seoul and when high-level talks between Washington and Pyongyang will resume.

Ri began the trip on Nov. 19 with a visit to Vietnam before flying to Syria to meet with Syrian President Bashar al-Assad.

Last week, Ri visited Beijing where he held talks with China's Foreign Minister Wang Yi and paid a visit to Chinese President Xi Jinping. He then visited Mongolia before coming back to Beijing to take a flight back home. 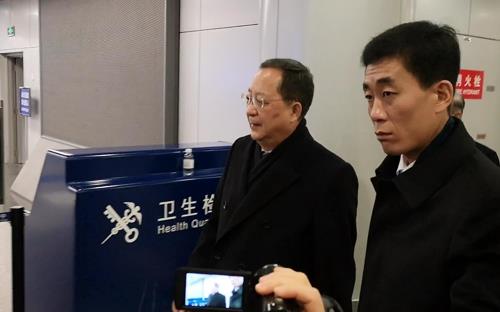