After opening a tad higher, the index wobbled between positive and negative territory throughout the session.

Foreigner investors dumped a net 190.9 billion won worth of local shares, outweighing buying by retailers and institutions worth a net 61.5 billion won and 121.1 billion won, respectively.

"A range of data has pointed to a global economic slowdown," said Seo Sang-young, an expert at Kiwoom Securities, citing the latest composite leading indicator data from the Organization for Economic Cooperation and Development as an example.

"The unresolved case of the detention of Huawei Technologies' chief financial officer in Canada still serves as a source of concern," he added.

Pharmaceutical giant Celltrion dived 10.02 percent to 220,000 won on news that the financial watchdog, the Financial Supervisory Service, launched a probe into its affiliate, Celltrion Healthcare, on suspicions that it breached accounting rules by re-selling its domestic sales rights to its parent firm to avoid losses in the second quarter.

On the contrary, Samsung BioLogics spiked 17.79 percent to 394,500 won as it avoided being delisted from the stock market and resumed trading.

The local currency closed at 1,131.1 won against the U.S. dollar, down 3.6 won from the previous session's close.

Bond prices, which move inversely to yields, were mixed. The yield on three-year Treasurys fell 1.1 basis points to 1.792 percent, and the return on benchmark five-year government bonds added 0.4 basis point to 1.877 percent. 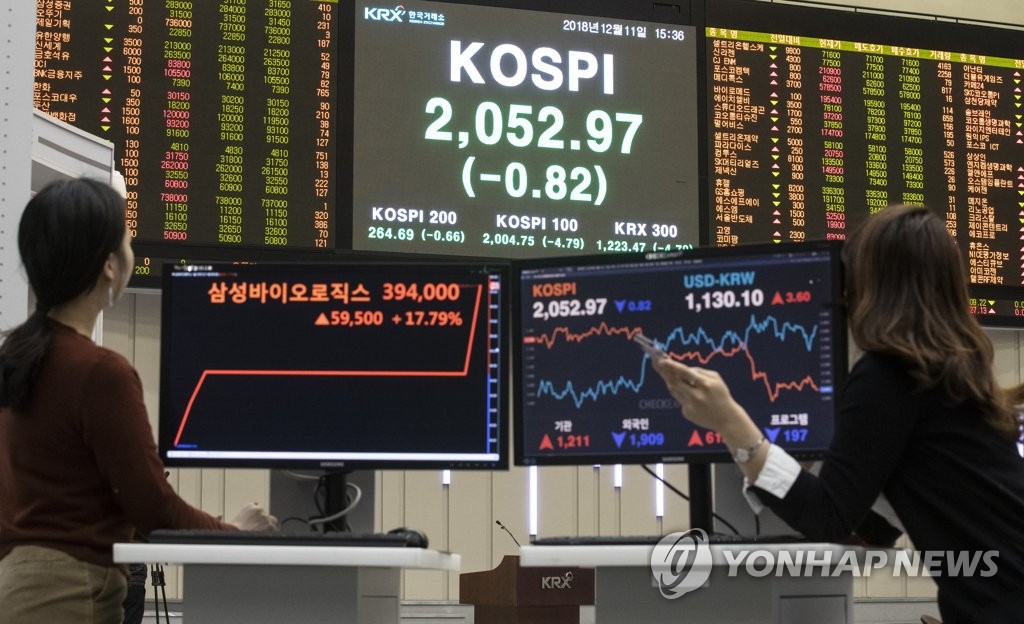