SEOUL, Dec. 11 (Yonhap) -- Doosan Bears' manager Kim Tae-hyung knew what was up when he saw the name of his prized pupil, catcher Yang Eui-ji, pop up on his caller ID Tuesday morning.

Yang, widely regarded as the best catcher in the Korea Baseball Organization (KBO), was the most coveted free agent this offseason. The Bears were trying to retain him. But Kim said he sensed that Yang was leaving when noticed an incoming phone call from the catcher.

And Kim's hunch proved to be true: Yang signed a four-year deal worth 12.5 billion won (US$11.1 billion) with the NC Dinos, which made him the highest-paid catcher in KBO history.

"Yang Eui-ji told me he was sorry about the move, but I said he didn't need to be because he is a professional athlete going to a team that recognized his value," Kim told reporters after a sports awards ceremony in Seoul on Tuesday, hours after Yang's deal was announced. "If he had re-signed with us, I would have been told by our team ahead of time. But when he called, I figured he wasn't coming back."

Losing a player of Yang's caliber would be a blow to any club. In 2018, Yang finished second in the league in both batting average (.358) and on-base percentage (.427), and led all backstops by throwing out 37.8 percent of would-be base stealers. He will be 32 next season, and should have at least a couple more All-Star seasons left in him. 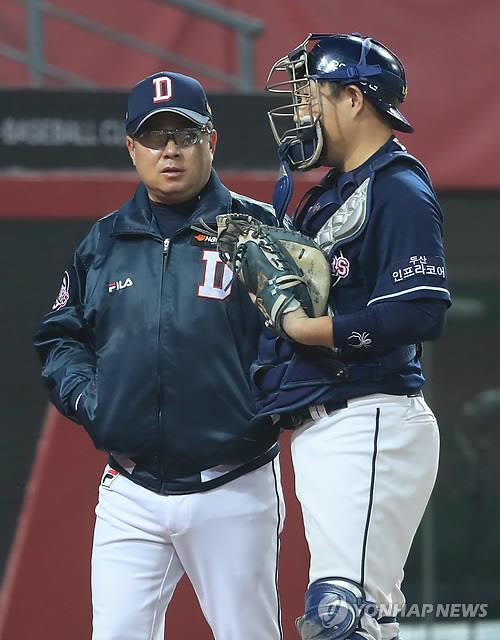 Kim said Yang will always be special to him because he convinced the Bears to draft him out of high school in 2006 when Kim was still a coach.

"I remember our scouting department raved about this high school catcher, and I went to take a look," recalled Kim, a former catcher himself. "And I told the team, 'This kid is pretty good . He plays like a veteran.' He just feels more special to me than other players because I first saw him when he was still a teenager."

While Yang will undoubtedly leave a big hole, Kim said he was ready to move on.

"We shouldn't worry about how we're going to compete next season without him," he said. "It's up to myself and my coaching staff to bring out the best in the remaining players. I think we have enough assets to fill that void. We shouldn't start fretting about next season before we even get there."

Before losing Yang, the Bears had let star outfielder Min Byung-hun walk via free agency last year. But Kim said he wasn't bitter about the Bears' failure to retain them because they'd kept other key players in previous years.

Baseball manager laments loss of catcher in free agency, ready to move on

Baseball manager laments loss of catcher in free agency, ready to move on