In a 140-kilometer drive on Tuesday that took two hours from Yongin to Yeoju, southeast of Seoul, the Palisade with a 2.2-liter diesel engine mated to a eight-speed automatic transmission showcased good driving characteristics in terms of acceleration, braking and overall handling.

Its suspension system soaked up bumps and imperfections of the road, and while there was wind and road noise at speeds exceeding 140 kilometers per hour, the cabin remained quiet overall. 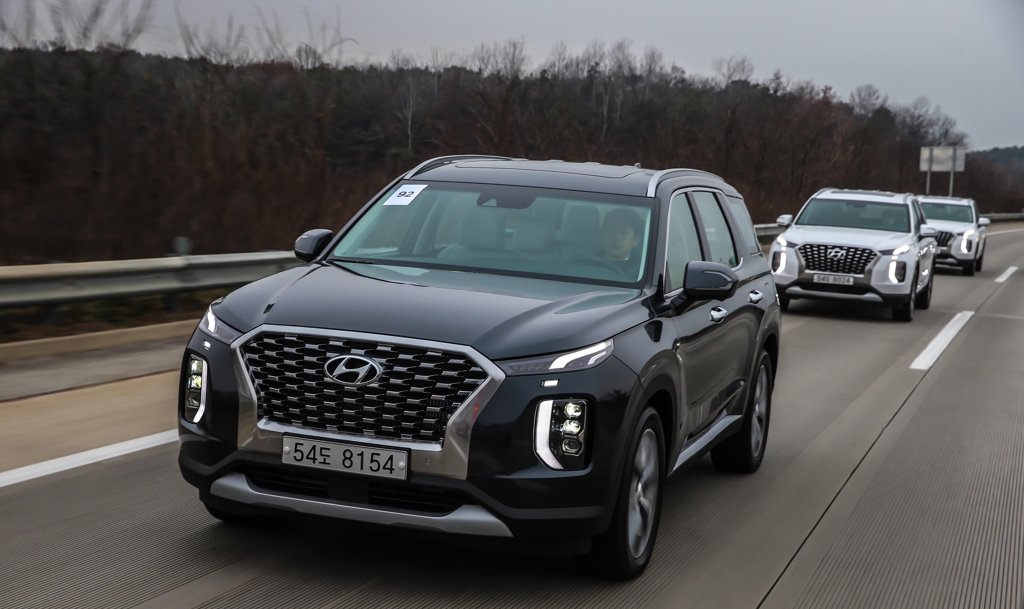 On a 2-kilometer off-road course, the Palisade showed off its driving performance in three different conditions -- snowy, sandy and gravel. The Palisade is Hyundai Motor Group's first SUV model equipped with such off-road functions.

On paved roads, the overall size of the car did affect acceleration even at full throttle, although it can be argued that such cars are not exactly designed for speed and are more tailored to meeting the requirements of a family hauler with the capability to go off-road under certain scenarios.

The Palisade is definitely a family car, offering more space and safety features at very reasonable prices compared to its immediate rivals, such as the Ford Explorer and the Chevrolet Traverse SUV.

The 2.2-liter diesel model starts at 36 million won (US$31,000), and the prices rise to 42 million won depending on options. The 3.8-liter gasoline turbocharged model is priced at 35 million-40 million won.

The new SUV boasts nine air bags, spacious eight-passenger seating with high-end materials used throughout the cabin, advanced convenience and safety features and ample cargo space, even with the third-row seats in place.

Hyundai has added the Palisade to its SUV lineup currently composed of the Kona subcompact, Tucson compact and Santa Fe midsize models.

It plans to launch the flagship crossover in the United States in the summer of 2019 to bolster sales in the world's most important automobile market.