The new TV series, which aired its first episode on Dec. 3, garnered a Content Power Index (CPI) score of 270.0 for the week of Dec. 3-9, narrowly defeating tvN's romance "Encounter," the chart-topper from the previous week.

In terms of viewership, the series performed well, with the numbers moving in the range of 7-10 percent, largely thanks to Shin's solid performance, its fast, dynamic storyline and vivid action scenes. 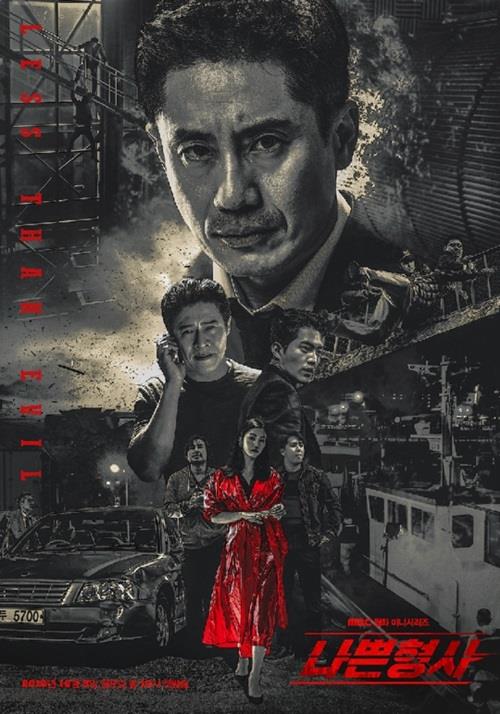 The better-than-expected performance is a welcome breakthrough for the terrestrial network that suffered embarrassingly low ratings for its Monday-Tuesday dramas.

"Bad Papa," the predecessor to "Less Than Evil," finished up with a rating of 3.9 percent on Nov. 27. "Risky Romance," which aired prior to "Bad Papa," performed even worse.

Meanwhile, the second-runner "Encounter" continues its grip on TV viewers as the blooming, tantalizing romance between a female hotel CEO (Song Hye-kyo) and an ordinary younger employee (Park Bo-gum) started to unfold. The latest episode, aired on Thursday, recorded 9.3 percent in viewership rating.

The CPI, created by CJ E&M and Nielsen Korea, measures the level of popularity, social media presence and influence on consumer behavior of entertainment TV programs aired on the three major terrestrial networks -- MBC, SBS and KBS -- and the seven cable channels owned by CJ ENM, including tvN, Mnet and OCN, during prime time. JTBC, another cable network that airs some highly popular entertainment shows and dramas, is not included in the measurement.

Can 'Less Than Evil' throw MBC a much-needed lifeline?

Can 'Less Than Evil' throw MBC a much-needed lifeline?