The drinking rate among the young is declining, but the severity of problems from drinking is still heavy, with one out of two youths drinking to dangerous levels, the report from the National Assembly Research Service said.

An online health survey of the young generation showed half of youths had a dangerous habit of drinking excessively at least once a month.

The report also counted "problem" drinkers, who consumed alcohol to relieve stress, drank alone or were warned about drinking by friends or family members. Such youths came to 38.9 percent among girls and 37.2 percent among boys. The rate was higher for students at senior high schools compared to junior high schools.

The data showed that there were 2,468 cases of drunk driving or alcohol-related accidents by youths in the years from 2013 to 2017. 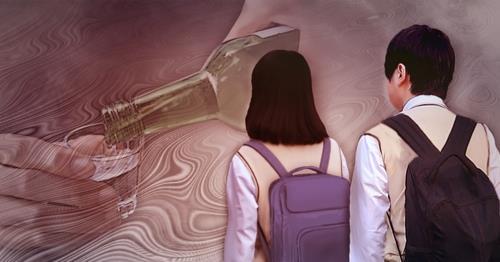 Huh Min-sook, who wrote the report, argued that the rise in alcohol addiction among the young is related to easy access. While the law prohibits sales of alcohol to the underage, 67.2 percent of the youths who attempted to buy alcohol were able to do so. Last year, there were 7,521 cases of illegal sales of alcohol to minors.

Huh said a legal revision is necessary to punish youths who buy alcohol, instead of reprimanding only the merchants who sell to minors. The law, as it is now, is often abused by underage drinkers who threaten to report storeowners to the police for selling them alcohol.

"If we want to prevent social problems from young people driving drunk or blackmailing people who sell them alcohol, we can introduce regulations that ban purchasing, owning or consuming alcohol by youths," Huh said. "If this sounds excessive, then we can attach special conditions to be able to punish youths who threaten storeowners or lie (about their age)."
(END)