SEOUL, Dec. 12 (Yonhap) -- South Korea's defense ministry on Wednesday held a ceremony to enshrine 365 sets of the country's Korean War troop remains at a state cemetery in Seoul, reiterating its pledge to never forget their sacrifices.

The ceremony at the Seoul National Cemetery brought together 350 people, including Prime Minister Lee Nak-yon, Defense Minister Jeong Kyeong-doo and representatives of veterans' and other civic groups.

The remains from the 1950-53 conflict include 288 sets that were discovered in frontline and rear areas and 12 sets retrieved in the Demilitarized Zone (DMZ) during preparatory efforts for next year's inter-Korean excavation project.

"The ministry will do its best to fulfill the state obligation and responsibility to return the fallen troops to their families, based on the wishes of the bereaved families who have waited for over 68 years," the ministry said in a press release.

Personnel from the ministry, Army and Marine Corps excavated 288 sets of war remains at the sites of 85 notorious battles, including ones in Yanggu, Inje, Cheorwon, Paju and Chilgok, from March through November.

Twelve sets of remains were recovered by the military from the DMZ during operations to clear land mines and build a road at Arrowhead Ridge, or Hill 281 -- a site the Koreas have designated for a project to excavate troop remains from April to October next year.

The military retrieved 13 sets of war remains from the ridge, but one of them is thought to be of a Chinese soldier.

Also among the remains enshrined Wednesday are 64 sets that were found during a joint project between the United States and North Korea to excavate troop remains in the communist state from 1996-2005.

Moreover, the remains include those of a South Korean soldier found in the North during the U.S.-North Korea retrieval project in 2001 and handed over to the South via Hawaii in July this year.

Seoul's excavation work began in 2000 when it marked the 50th anniversary of the outbreak of the war. Since then, it has discovered 10,238 sets of the country's troop remains, including those enshrined this week.

The number of fallen South Korean troops whose remains have yet to be recovered stands at around 123,000. 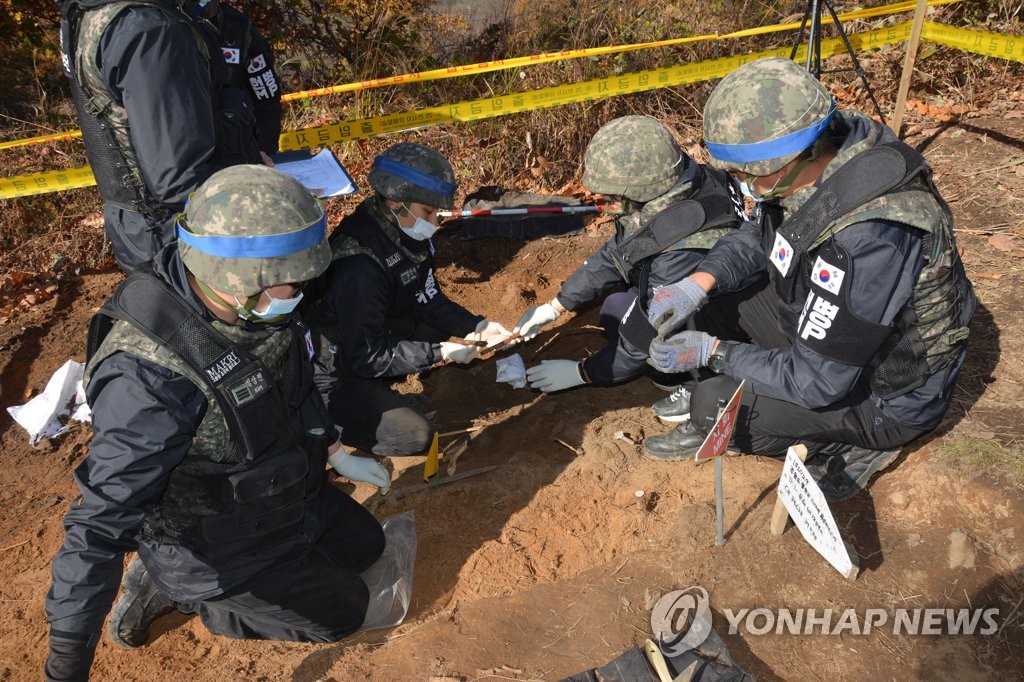