SEOUL, Dec. 12 (Yonhap) -- A U.S. archbishop will travel to South Korea next week in a bid to assist their Korean Catholic counterparts' efforts to build peace with North Korea, the local church said Wednesday.

On the second day of the visit, the archbishop will attend a meeting on inter-Korean and North Korea-U.S. diplomatic issues, hosted by the Korean body's Committee for the Reconciliation of the Korean People.

North Korean refugees will also be part of the meeting to discuss North Korean human rights, with the presence of Father Gerard E. Hammond, who has been involved in North Korean humanitarian aid for the last 20 years at the Korean unit of the Maryknoll mission.

Later in the trip, the American archbishop will meet with Archbishop Kim Hee-joong, the chairman of the Catholic Bishops' Conference of Korea, as well as Cardinal Yeom Soo-jung, the Korean Roman Catholic Archbishop of Seoul, to discuss peace efforts with North Korea.

On the last day of the visit, Archbishop Broglio will visit the Unification Ministry and the U.S. Embassy in Seoul before leaving the country.

Born in Cleveland Heights, Ohio, he was ordained to the priesthood for the Diocese of Cleveland in 1977 and joined the Vatican's diplomatic corps. He served as the Vatican's envoy to the Dominican Republic and Puerto Rico and received his Episcopal consecration from Pope John Paul II. 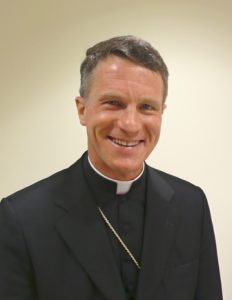