Kang delivered the message to her Japanese counterpart, Taro Kono, in phone talks, according to her ministry.

Kang explained the South Korean government's position on the rulings and called for Japan's "prudent" response, it said but did not elaborate in the two-paragraph press release. 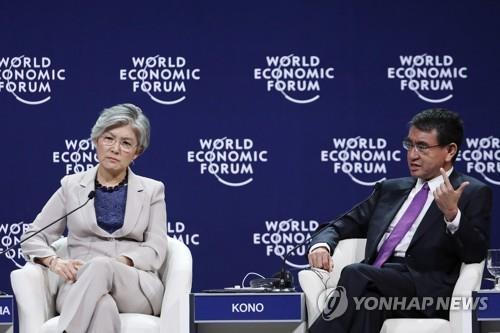 It marked their first direct communication since late November, when the Supreme Court ruled in favor of about a dozen Koreans demanding the individual rights to compensation for forced labor during World War II.

Mitsubishi Heavy Industries, Ltd. was ordered to compensate 10 Koreans who worked at its shipyard and other production facilities in Hiroshima and Nagoya in 1944 with no pay and a bereaved family member of another on two separate suits. Korea was under Japan's colonial rule at that time.

In a similar verdict, the court ruled a month earlier that another Japanese company, Nippon Steel & Sumitomo Metal Corp. (NSSM), should pay for four South Koreans for their wartime forced labor and unpaid work.

While the Moon Jae-in administration stated that it respects the rulings, Japan has fiercely protested them.

Japan claims all reparation issues connected with its 1910-45 colonization were settled in a 1965 bilateral state-to-state accord on normalizing diplomatic ties. Japanese officials point out that their country granted the then South Korean government a huge amount of money as part of the deal.

He argued that the court rulings have rocked the foundation of the Seoul-Tokyo relations.

He pressed the South Korean government to be responsible itself for compensating its citizens with regard to the issue.

The relationship between the neighboring countries suffered a heavy blow as well last month, as Seoul announced a decision to disband a Tokyo-funded foundation for the victims of the sexual enslavement of Korean women by Japanese troops during the war. 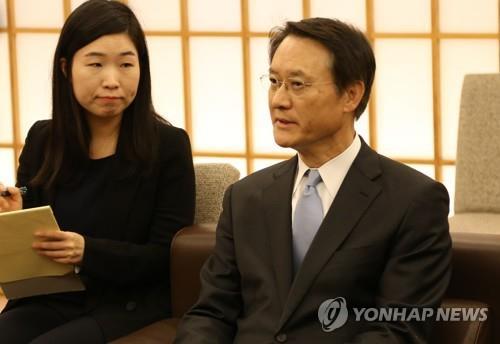 Lee Su-hoon, Seoul's ambassador to Tokyo, agreed that the bilateral ties are in a "rather grave" situation.

"But everybody would agree that the cooperative relations between the two nations for future-oriented development shouldn't be marred due to these issues," he said at a press briefing in Seoul.

He is on a visit there to attend the annual gathering of South Korea's ambassadors and other senior envoys abroad.