INCHEON, Dec. 12 (Yonhap) -- The unified Korean mixed doubles table tennis team of Jang Woo-jin (South) and Cho Hyo-sim (North) had their first practice ahead of the season-ending tournament near Seoul on Wednesday.

Jang and Cha are back together for the International Table Tennis Federation (ITTF) World Tour Grand Finals, which will start Thursday at Namdong Gymnasium in Incheon, 40 kilometers west of the capital.

The mixed doubles competition starts with the quarterfinals Thursday, and the final is scheduled for Saturday. 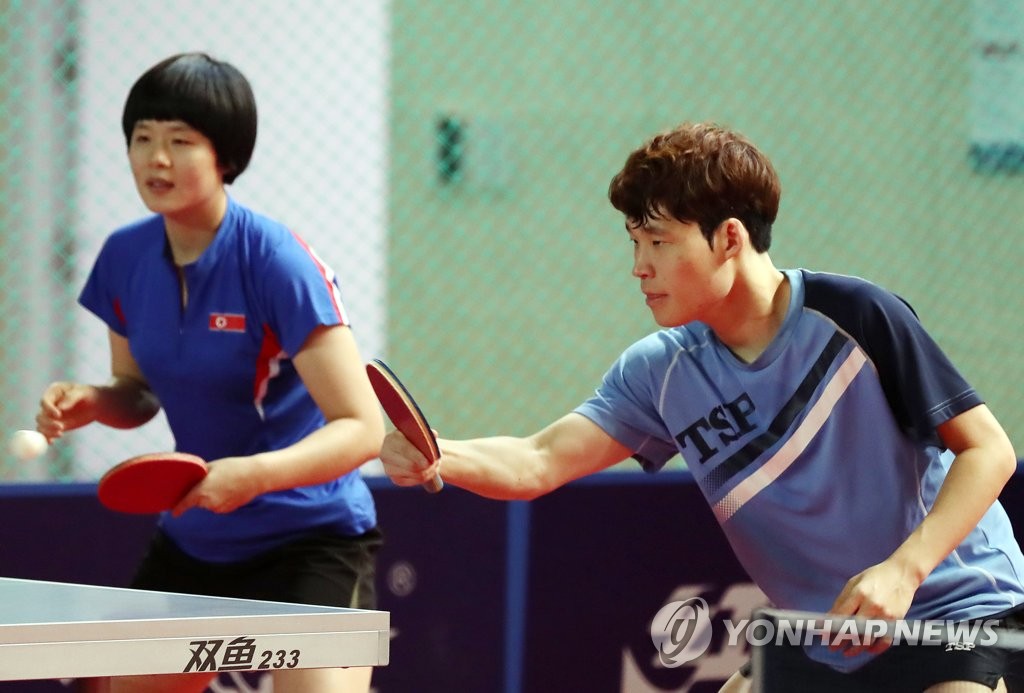 Jang and Cha won the mixed doubles title at the Korea Open in Daejeon, 160 kilometers south of Seoul, in July. They also played together at the Austria Open in November and lost in the semifinals to Xu Xin and Liu Shiwen of China.

They will take on Maharu Yoshimura and Kasumi Ishikawa of Japan, the 2017 world champions in mixed doubles.

Ishikawa is world No. 3 in the women's singles, while Yoshimura is ranked 28th.

A South Korean team of Lim Jong-hoon and Yang Ha-eun will also be in action. If both the unified Korean and the South Korean tandems win their quarterfinals matches, they will clash in the semifinals on Friday.

But Jang said he wasn't looking past the quarterfinals against the Japanese duo.

"Ishikawa is such a good player, and Hyo-sim and I talked about how to keep her in check," Jang said. "Hyo-sim is a great receiver, and we should have good results. The Grand Finals are the biggest tournament, and our goal obviously is to win the title."

During practice, Jang and Cha traded shots with Lim and Yang, who defeated the Yoshimura-Ishikawa team in the semifinals of the Australian Open in July this year.

Lim said Jang and Cha were a stronger team than he'd expected, and added he hoped to meet the unified team in the semifinals.

Jang and Cha are scheduled to get in another practice Thursday morning. Their quarterfinals match is scheduled for 1:40 p.m.

This competition is open to the top 16 players in the men's and women's singles, and the top eight teams in the men's, women's and mixed doubles, based on their performances in the 12 ITTF World Tour events.