SEOUL, Dec. 13 (Yonhap) -- Despite bad weather, South Korean troops kicked off a regular exercise Thursday to hone their combined capabilities to defend Dokdo, a pair of rocky islets in the East Sea.

The two-day maritime drills involve the 3,200-ton Gwanggaeto the Great destroyer and several other Navy and Coast Guard ships.

The military canceled a plan to mobilize such aircraft as F-15K fighter, P-3C maritime surveillance plane and UH-60 helicopter on the day due to inclement weather, according to a Navy official. It has also postponed a Marine Corps landing exercise until Friday. 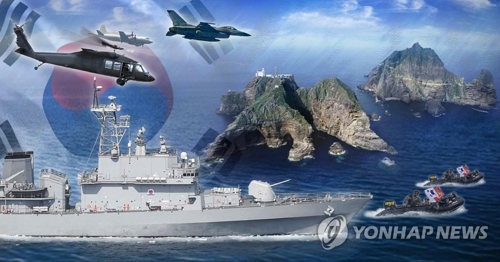 South Korea has maintained effective control of the nation's easternmost islets with a small police detachment since its liberation from Japanese colonial rule in 1945. But Japan has persistently laid claim to the islets.

The Japanese government said the South Korean military's exercise plan is "very regrettable." In a statement, the foreign ministry said it can't accept the move and called for a halt to it.