SAINT-BRIEUC, France, Dec. 13 (Yonhap) -- A South Korean government agency said Thursday it has found, for the first time, a specially published edition of a newspaper reporting the impeachment in 1925 of Rhee Syng-man, president of the Korean Provisional Government in Shanghai.

A team from the National Institute of Korean History in Gwacheon, just south of Seoul, discovered the edition issued by the provisional government's newspaper, The Independence Newspaper, among documents kept at the house of Jean Jacques Hong Fuan, the second son of a Korean independence fighter, in the town of Saint-Brieuc in the northwestern French region of Brittany.

Jean Jacques' father, Hong Jae-ha (1898-1960), who came to France via Russia and the North Sea and helped the Korean independence movement against Japan's 1910-45 colonial rule of the Korean Peninsula, worked closely with the French branch of the provisional government.

During the colonial era, the government-in-exile in the Chinese city operated the newspaper as part of its efforts to inform the world of the Korean people's will to gain independence.

The extra edition, titled "the passage of a bill calling for the president's impeachment" by the Provisional Government, carried articles on the impeachment and dismissal on March 18, 1925, of President Rhee Syng-man, and the election of Park Yeun-shik as acting president.

Leaders in the provisional government accused Rhee, one of the main leaders of Korean independence activities in exile, of misuse of power and removed him from office. Rhee became South Korea's first president after Korea's liberation from the Japanese rule in 1945. 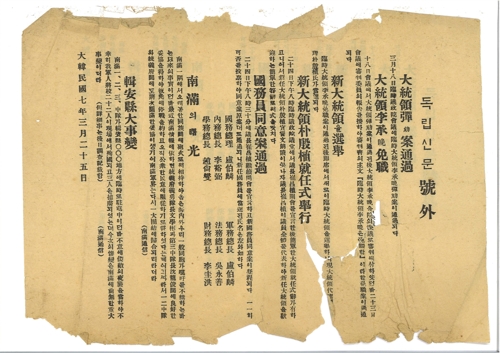 The content of the extra edition, even though it is not in a perfect state of preservation, as it is partially damaged, is not hard to make out. Published in mimeograph, it is written in mixed script, Chinese and Korean, with the characters of the two languages different in size.

There have been historical records on why and how Rhee was impeached, including the provisional government's gazette No. 42, but the existence of an extra edition of the newspaper inform the general public of the impeachment has not been known.

Jean Jacques has kept the extra, which his father, Hong, had preserved until he died of cancer in 1960 on the outskirts of Paris, in a storage area of his house via his sister.

With the help of a South Korean couple living in Paris, Jean Jacques has sorted out rare documents, including letters between his father and figures at the French branch of the Korean provisional government in China, which were handed down from his sister in 2006.

The couple -- Kim Seong-young, an assistant professor at the Rennes School of Business, and Song Eun-hye, an instructor at the University of Rennes -- contacted the National Institute of Korean History to confirm the significance of the documents left by Hong. 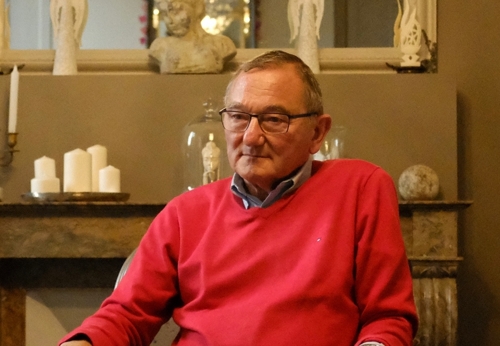 The team from the institute arrived at Jean Jacques' residence last week and confirmed many historical documents, including the extra edition, which was later donated to the South Korean government agency.

"The existence in itself of an extra edition reporting Rhee Syng-man's impeachment has not been known," Kim Deuk-jung, a senior researcher from the institute, said.

"It's new historical material about the provisional government as it carries information that we could not find in a photoprint edition of the Independence Newspaper."

The institute plans to unveil the extra edition in an exhibition next year to celebrate the 100th anniversary of the establishment of the government in exile, which played a role in uniting the nation during Japan's colonial rule.

The provisional government had provably published a large volume of the extra edition but they are believed to have been lost amid civil war in China and Japan's oppression of the Korean people and the Korean War.

The extra edition, which appears to have been given to Hong by a figure of the provisional government, has been kept in a relatively good state of preservation due to efforts of Hong and his offspring.

The historical document's discovery also demonstrates Hong's close relations with people of the provisional government when he was in France.

Among other articles left by Hong are documents on his participation in World War I under the Russian army and letters he exchanged with Hwang Ki-hwan, chief secretary of the Korea provisional government's French branch. Hong also served as the second head of a Korean people's body, the Korean People's Council, in France.

Jean Jacques has expressed his desire to donate to the institute all of the documents on Korea's history, passed down from his father and the institute is pushing for a project to make a collection of Hong Jae-ha. 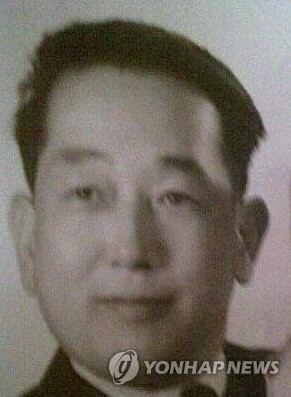