INCHEON, Dec. 13 (Yonhap) -- The unified Korean mixed doubles table tennis team of Jang Woo-jin (South) and Cha Hyo-sim (North) won their first match at the season-ending tournament near Seoul on Thursday, setting up a showdown with a South Korean duo.

Jang and Cha held off Maharu Yoshimura and Kasumi Ishikawa of Japan 3-2 (12-10, 8-11, 11-5, 9-11, 11-5) in the quarterfinals of the International Table Tennis Federation (ITTF) World Tour Grand Finals at Namdong Gymnasium in Incheon, 40 kilometers west of the capital.

In Friday's semifinals, they will go on to face Lim Jong-hoon and Yang Ha-eun of South Korea. Lim and Yang knocked out Lubomir Pistej and Barbara Balazova of Slovakia 3-0 (11-6, 11-7, 12-10) in their quarterfinals match.

Against the 2018 world champions, Jang and Cha battled back from a 10-9 deficit in the opening game to score three straight points. 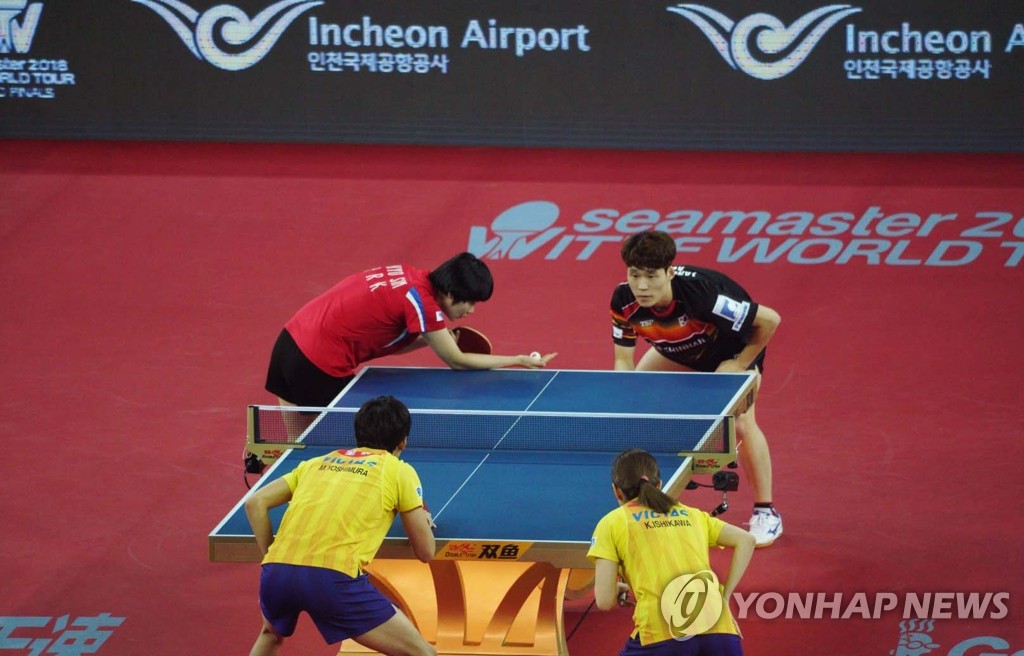 After dropping the next game, Jang and Cha bounced back for a breezy 11-5 win in the third game. The Japanese duo extended the match by taking the fourth game 11-9.

And in the deciding fifth game, Jang and Cha opened up an 8-4 lead, and closed out the Japanese 11-5.

This competition is open to the top 16 players in the men's and women's singles, and the top eight teams in the men's, women's and mixed doubles, based on their performances in the 12 ITTF World Tour events.