WASHINGTON, Dec. 13 (Yonhap) -- The Smithsonian's National Portrait Gallery in Washington will open an exhibition this week of portraiture by the feminist South Korean artist Yun Suknam.

The exhibition, titled "Portraits of the World: Korea," will run from Friday through Nov. 17, 2019, and feature Yun's "pivotal" work, "Mother III," the museum said.

The 79-year-old artist is described as "a pioneer investigator of feminism through the lens portraiture." And her 1993 Seoul exhibition, "The Eyes of Mother," challenged Confucian ideals of womanhood through a series of portraits of her own mother.

"Yun creates artworks that reinterpret themes, such as 'motherhood,' by breaking down gender assumptions and embracing female strength and resilience," the exhibition's curator, Robyn Asleson, said.

"We think visitors will be fascinated to discover not only Yun's contributions to the Korean feminist movement over the past 30 years but also how this particular work relates to feminism's impact on the art of portraiture in the United States."

The exhibition is the first to focus on Yun's work in a U.S. museum.

Her wood assemblage will be displayed together with portraits of and by American feminist artists, including Anh Duong, Judith Shea, Kiki Smith and Ruth Ellen Weisberg.

The exhibition is the second in a series highlighting the global context of American portraiture. The first edition was dedicated to Switzerland. 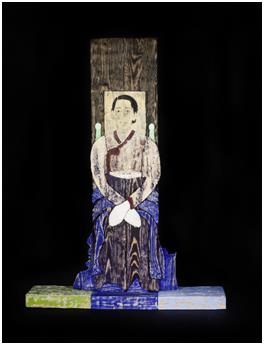