SEOUL, Dec. 14 (Yonhap) -- An independent lawmaker who formerly served as a senior presidential press secretary under ousted President Park Geun-hye was given a suspended prison sentence on Friday for interfering in news coverage of a 2014 ferry sinking that claimed more than 300 lives.

The Seoul Central District Court sentenced Rep. Lee Jung-hyun, who was indicted for violating the broadcasting law, to one year in prison with a stay of execution for two years.

Lee will lose his parliamentary seat if his sentence is finalized by the court. Under the law, lawmakers are stripped of their parliamentary seats if they receive sentences heavier than imprisonment in criminal cases. 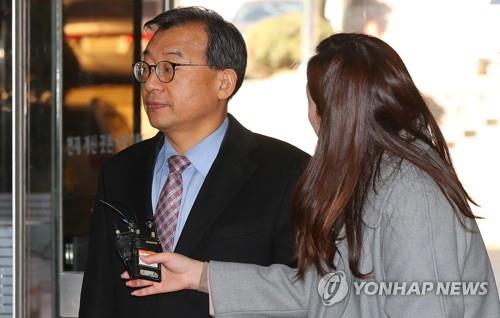 Lee, known for his close ties with Park, was accused of trying to tone down the public broadcaster KBS' coverage of the Sewol ferry that sank off the country's southwestern coast on April 16, 2014. The sinking of the vessel killed 304 passengers aboard, mostly high school students on a field trip to the resort island of Jeju.

Soon after the accident, Lee, then an influential senior presidential secretary, made a phone call to the then-KBS chief editor and suggested how the news coverage should be edited.

The Seoul court said Lee made the controversial call not as an individual but as a presidential press secretary and that the KBS editor could have perceived his remarks as reflecting the president's will.

After the ruling, Lee swiftly left the court without saying whether he will lodge an appeal.
(END)