The two sides said they will travel to Lausanne, Switzerland, on Feb. 15 next year and hold a three-way meeting with the IOC on their bid to co-host the 2032 Summer Olympics.

The sports ministers from the two Koreas, Do Jong-hwan from Seoul and Kim Il-guk from Pyongyang, will head their respective delegations and will be joined by officials from their national Olympic committees. They will meet with IOC President Thomas Bach.

No Olympic Games, summer or winter, have been shared by two countries.

Bach said at the time the IOC "welcomes very much" the intention of the two Koreas to jointly host the Olympics.

The Koreas are hoping to deliver a formal letter of intent to co-host the Olympics to the IOC in the near future. 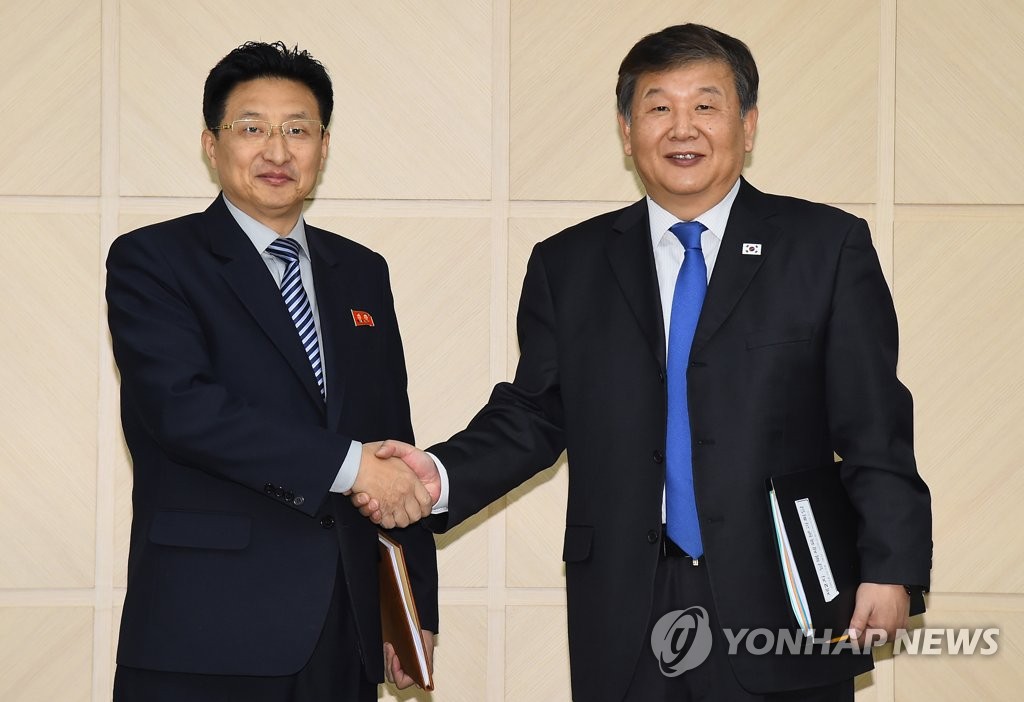 At both the Summer Olympics and Paralympics, the Koreas have agreed to march as one at the opening ceremonies.

The Koreas have yet to determine in which Olympic sports they will assemble joint teams. They will likely do so in sports where they have previously combined teams.

The Koreas have never fielded a joint team at the Summer Olympics before. In February this year at the PyeongChang Winter Games in the South, the two sides combined their women's hockey teams for the first pan-Korean team in Olympic history.

Building on that momentum, the Koreas competed as one at a few international table tennis tournaments that followed. Then at the 18th Asian Games in Jakarta and Palembang, Indonesia, in the summer, the Koreas sent joint teams in women's basketball, rowing and canoeing's dragon boat racing.

They captured one gold and two bronze medals in dragon boat racing and silver in women's basketball.

In September, the Koreas competed together in the mixed team event at the World Judo Championships in Azerbaijan.

At the previous sports meeting on Nov. 2 in Kaesong, the two sides agreed to field a joint team at the men's handball world championships in Germany next month.

After Friday's talks, Roh said the Koreas are nearing an agreement on sports in which they'll have joint teams, without disclosing what they were.

"Once we combined the wish lists from both sides, it came to around eight sports," Roh added.

The vice sports minister said the government will not force joint teams down the throats of athletes.

"It won't be the sports ministry or the Korean Sport and Olympic Committee making that decision," Roh said. "The sports' national governing bodies will have the final say."

South Korea has been a force at the Summer Olympics, having ranked inside the top 10 in medal races at each of the past four competitions and in eight of the last nine dating back to Los Angeles 1984. At the previous Summer Olympics in Rio de Janeiro in 2016, South Korea won nine gold medals and 21 medals overall to rank eighth

North Korea hasn't been nearly as successful. It won two gold medals in Rio and four gold medals in London in 2012. Five of its 16 gold medals all-time at the Summer Olympics have come from weightlifting.

When the unified teams won medals at the Asian Games this year, they didn't count toward the total of either South Korea or North Korea but were instead awarded to a new entity titled "Korea." The same procedure will likely apply in Tokyo.

When the Koreas march in as one at the Tokyo 2020 opening ceremony, it'll be the 12th such occasion at an international multisport competition. They also paraded in behind the Korea Unification Flag at the opening ceremony for PyeongChang 2018 in February and at the Asian Games in Jakarta in August.

At both ceremonies, the Koreas had one athlete each carrying the flag together.