The Ministry of Economy and Finance's growth outlook is in line with the 2019 growth projection of 2.6 percent made by the International Monetary Fund. Last year, Asia's fourth largest economy grew 3.1 percent.

The ministry slashed this year's growth estimate to 2.6 percent to 2.7 percent from its previous forecast of 2.9 percent in July due to a lack of corporate investments.

To counter sluggish growth, Seoul unveiled a set of measures to stimulate the economy in a key economic meeting presided over by President Moon Jae-in in Seoul.

Under the plan, the government said it will speed up administrative procedures to ensure a quick implementation of major corporate investments worth 6 trillion won (US$5.3 billion), including a 3.7 trillion-won project by Hyundai Motor Group to build a 105-story building in southern Seoul.

In 2014, Hyundai Motor Group, the world's fifth-largest carmaker by sales, purchased the land for the landmark building, though no significant progress has been made yet.

"We will expand the investment climate by opening the sluice gates of massive investments that have been held back," Hong Nam-ki, the minister of economy and finance, said in a joint news conference with other ministers at the government building in central Seoul. 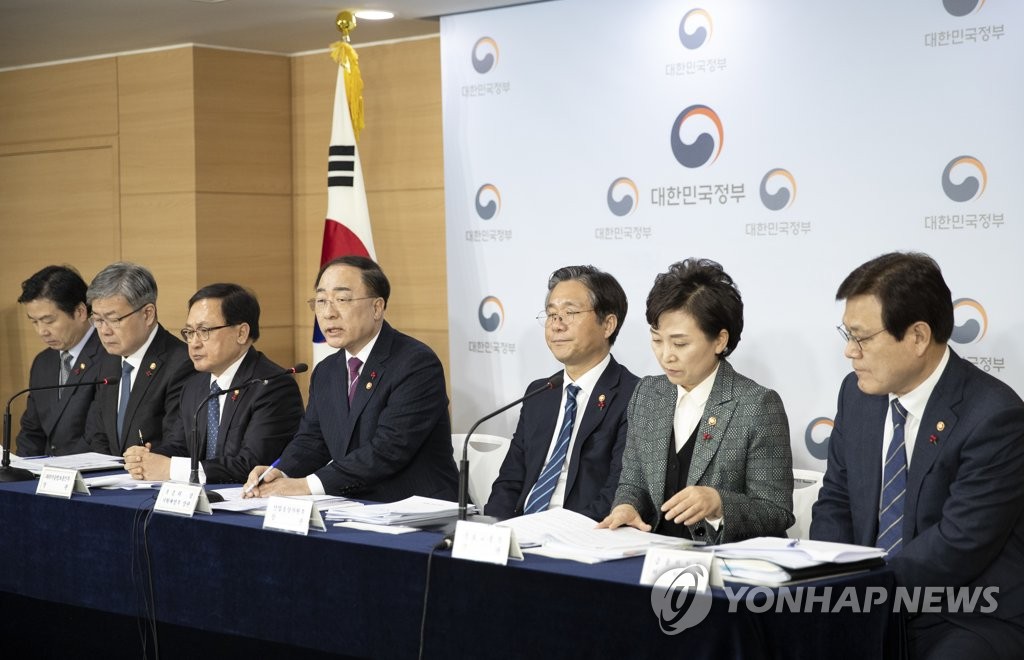 Hong also suggested that the government could lift regulations "in a swift and decisive manner" to boost investment.

The unemployment rate for young adults -- those aged between 15 and 29 -- stood at 7.9 percent in November, much higher than the overall jobless rate of 3.2 percent, according to Statistics Korea.

In response, the government plans to frontload 61 percent of the national fiscal budget for 2019 during the first half of next year to respond to downside risks in consumption and employment, the ministry said.

In particular, the government will concentrate its assistance on the auto, shipbuilding, display and petrochemical sectors as part of its efforts to boost innovation in manufacturing, a key element of the South Korean economy.

Moreover, South Korea will encourage companies to work on projects that develop core technologies for electric and autonomous vehicles while providing more subsidies to such next-generation cars.

South Korea seeks to increase the number of all-electric and hydrogen fuel-cell electric vehicles to 42,000 units and 4,000, respectively, next year from 26,500 and 746, this year, the ministry said.

The move came as global carmakers have been racing to go eco-friendly amid tightened regulations on emissions of greenhouse gases that scientists say are to blame for global warming.

The ministry said it will provide an array of tax and other benefits to such areas as smart factories, future vehicles, bio-health and financial technology (fintech).

Hong also said the government will drastically expand investment in research and development to secure core technologies at the center of fourth industrial revolution.

Separately, South Korea will push forward a program that allows residents in urban areas to share their homes with local travelers for up to 180 days in return for money.

Currently, residents in urban areas, excluding rural communities defined by law, can only share their homes with foreign tourists.

Airbnb Inc., a global house-sharing platform, has launched a campaign for the change in South Korea's Tourism Promotion Act.