SEOUL, Dec. 17 (Yonhap) -- After months of restraint, North Korea is gradually shifting gears up in its criticism of the United States over their deadlocked denuclearization negotiations, apparently signaling that its patience is wearing thin.

Since June's historic summit between U.S. President Donald Trump and North Korean leader Kim Jong-un, the regime in Pyongyang has refrained from criticizing Washington as their denuclearization negotiations progressed, even though propaganda media outlets continued their routine, lightweight criticism.

With no signs of a resolution in sight, the North has begun increasing its complaints and criticism step by step, with its official news agency issuing a commentary outlining Pyongyang's position on the impasse on Thursday, and then a foreign ministry-affiliated analyst making a similar statement on Sunday.

The upgrading of the level of such statements could be designed to pressure the United States by showing that Pyongyang's patience is wearing thin as it waits for Washington to take corresponding measures, such as sanctions relief, in exchange for its denuclearization steps.

Still, the statements' relatively mild tone, compared with those laced with harsh war threats during the heightened tensions last year and the statements' still unofficial level suggest that the North doesn't want to break off negotiations altogether.

"North Korea is in a tense tug of war with the United States while sticking strongly to the principle of action for action, but it is adjusting the level of criticism as it doesn't want to break the framework of dialogue," Yang Moo-jin, a professor at the University of North Korean Studies, said. 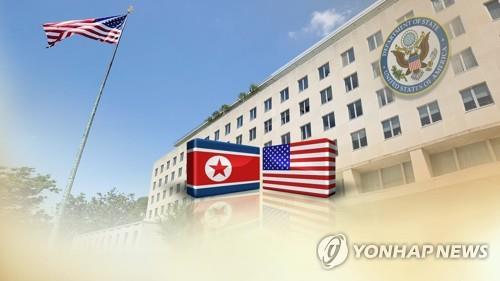 Thursday's commentary from the North's official Korean Central News Agency is believed to be the first time that the North has clarified its position on the nuclear issue since the denuclearization negotiations reached the impasse.

The lengthy commentary blamed the U.S. for the deadlock and expressed frustration.

"The DPRK-U.S. negotiations are at stalemate ... Who is to blame for it? Needless to say, the blame rests with the U.S.," it said, using the abbreviation for the North's official name, the Democratic People's Republic of Korea. "The DPRK moves, but the U.S. does not move even an inch. How can the two countries sit together at the negotiating table under the situation?"

The KCNA also said that the North has taken a string of measures, such as suspending nuclear and missile tests and repatriating the remains of U.S. soldiers, but the U.S. "still claims North Korea has done nothing and that denuclearization process has not kicked off, yet," it said.

"It is just the U.S. which is much indebted to the DPRK. The ball is now in the U.S. court," it said.

The commentary even likened the Trump administration's attitude to the "strategic patience" policy of the administration of former President Barack Obama, saying people think that "the 3rd Obama regime came to power."

It also cited a famous quote by Albert Einstein: "Insanity is doing the same thing over and over again and expecting different results." The North's point is that the strategic patience policy of waiting for Pyongyang to give up nuclear weapons while keeping sanctions and pressure on the regime won't work.

"The DPRK is waiting with patience to see the U.S. abandon a wrong way of thinking and come to its own senses," it said. "As one can not make a fire underwater, the improvement of the DPRK-U.S. relations is incompatible with sanctions and pressure."

Sunday's statement was more concise as it came from a foreign ministry-affiliated think tank.

"Now, the international society is unanimous in welcoming the proactive denuclearization steps taken by the DPRK and urging the U.S. to respond to these steps in a corresponding manner," said the statement from the policy research director of the Institute for American Studies of the North's Ministry of Foreign Affairs.

Even though Trump "avails himself of every possible occasion to state his willingness to improve DPRK-U.S. relations," the State Department is "bent on bringing the DPRK-U.S. relations back to the status of last year which was marked by exchanges of fire," the statement said.

Relations between the North and the U.S. should be improved on a "step-by-step approach of resolving what is feasible one by one, by giving priority to confidence building," given the deep-rooted hostility between the two countries, it said.

Should the U.S. think it can force the North to give up nuclear weapons through sanctions and pressure, it will "block the path to denuclearization on the Korean peninsula forever -- a result desired by no one," the statement said.
(END)

(News Focus) N. Korea shifting gears up in criticism of U.S. in sign of thinning patience

(News Focus) N. Korea shifting gears up in criticism of U.S. in sign of thinning patience