SEOUL, Dec. 18 (Yonhap) -- The state-run Korea Development Bank (KDB) said Tuesday it supports GM Korea Co.'s plan to spin off its research unit, marking a reversal from the lender's opposition to the controversial scheme that is also strongly opposed by the carmaker's labor union.

Lee Dong-gull, governor of the KDB, told reporters that the bank will drop a legal action against GM Korea over the spin-off plan after GM Korea completes setting up a new entity.

Under the plan, GM Korea will set up a new entity that will handle automotive engineering and design, while the parent will focus on manufacturing and sales.

Lee said GM Korea pledged to provide works to the new entity over the next 10 years and the spin-off plan would help GM Korea cut costs.

The KDB's decision came after GM Korea recently submitted details of its spin-off plan to the bank, the second-largest shareholder of GM Korea.

The KDB will become the second-largest shareholder of the new research unit, Lee said.

According to the details of the spin-off plan, GM Korea's research and manufacturing units are expected to see their operating income improve and debt ratios decline. 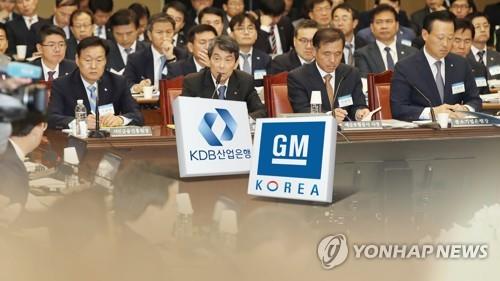 Last week, the KDB said it will complete its injection of US$750 million into the South Korean unit of General Motors Co. later this month.

The KDB and GM signed a deal in May on the rescue package for GM Korea.

Under the agreement, the KDB pledged to inject $750 million, while GM agreed to provide $3.6 billion in fresh loans to keep GM Korea afloat.

In June, the KDB injected $375 million into GM Korea, but the bank had said the remaining half may not be provided amid concerns that the U.S. carmaker may keep only its research facility in South Korea and eventually shut down its manufacturing facilities here.

The remaining $377 million will be provided to GM Korea on Dec. 26, the KDB said.