SEOUL, Dec. 19 (Yonhap) -- In the coming year, North Korea and the United States will likely continue lethargic negotiations on denuclearization, ratcheting up pressure on South Korea to choose between inter-Korean ties and the alliance, a major security think tank here said Wednesday.

The Asan Institute for Policy Studies said next year is expected to represent a "moment of truth" in the North Korea issue.

"When it comes to North Korea-U.S. relations, the dialogue mood will go on without big progress or breakdown amid no accomplishment," it said in a 121-page report, titled "Korea's Choice."

It compiled far-reaching reviews of regional and global diplomatic activities in 2018 and prospects for the new year.

The secretive North is expected to keep trying to evade high- or working-level talks with the U.S., in which discussions on the declaration of its nuclear arsenal and verification are inevitable, in pursuit of a summit-level showdown, the institute said. 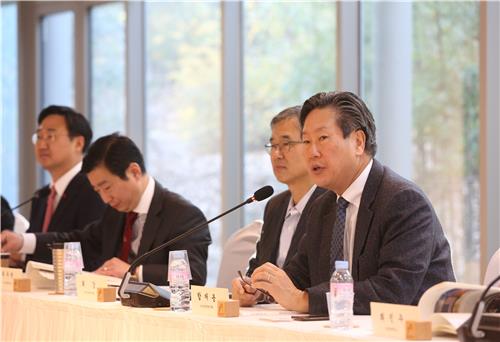 In particular, it added, the North won't permit the sampling of nuclear materials by foreign inspectors at the Yongbyon nuclear complex.

Probably, it's making a lot of efforts to master atmospheric re-entry technology for intercontinental ballistic missiles, according to the think tank.

"The year 2019 will be a test of North Korea's veracity on its strategic decision related to denuclearization," it said.

Such a situation will put Seoul on the horns of a dilemma between Pyongyang's demand for expanding inter-Korean cooperation and Washington's policy of maintaining sanctions.

"The fate of the South Korea-U.S. alliance, which has been robust for 65 years since the Korean War, will stand at a crossroads," it said.

On the other hand, ties between Pyongyang and Beijing are expected to enter a new stage, as they will mark the 70th anniversary of the establishment of diplomatic relations, the institute said.

Chances are high that Chinese President Xi Jinping will travel to Pyongyang in 2019 and support the legitimacy of the Kim Jong-un regime, it added.

Confronted with troubles in relations with regional powers, the Moon Jae-in government may be forced to consider the revival of the "Global Korea" campaign, spearheaded by previous conservative administrations, to expand Seoul's role in dealing with such problems as climate change, energy issues and cybersecurity, it said.

In a press conference on the report, Shin Beom-chul, a senior fellow at the institute, said the allies are likely to postpone or scale down their spring exercises again. But if the stalemate lasts through the summer, they are expected to stage a large-scale combined Ulchi-Freedom Guardian training in August, he said.

On the North Korean leader's upcoming New Year's address, Shin raised the possibility that he will talk about a possible downsizing of the country's military.

The North's leader uses the closely-watched speech mainly for the domestic audience and Kim is likely to emphasize the economy, especially the need to foster cutting-edge technologies, and social control, he said.

"In the national defense field, he's unlikely to talk about nuclear force. Rather, he may deliver a message on a reduction in the number of troops," he said.

(LEAD) No significant progress in denuclearization expected in 2019: think tank

(LEAD) No significant progress in denuclearization expected in 2019: think tank