SEOUL, Dec. 20 (Yonhap) -- The U.S. expression of a willingness to allow American citizens to travel to North Korea for aid delivery is seen as a joint effort with South Korea to find a way out of the impasse in the stalled denuclearization talks with Pyongyang. 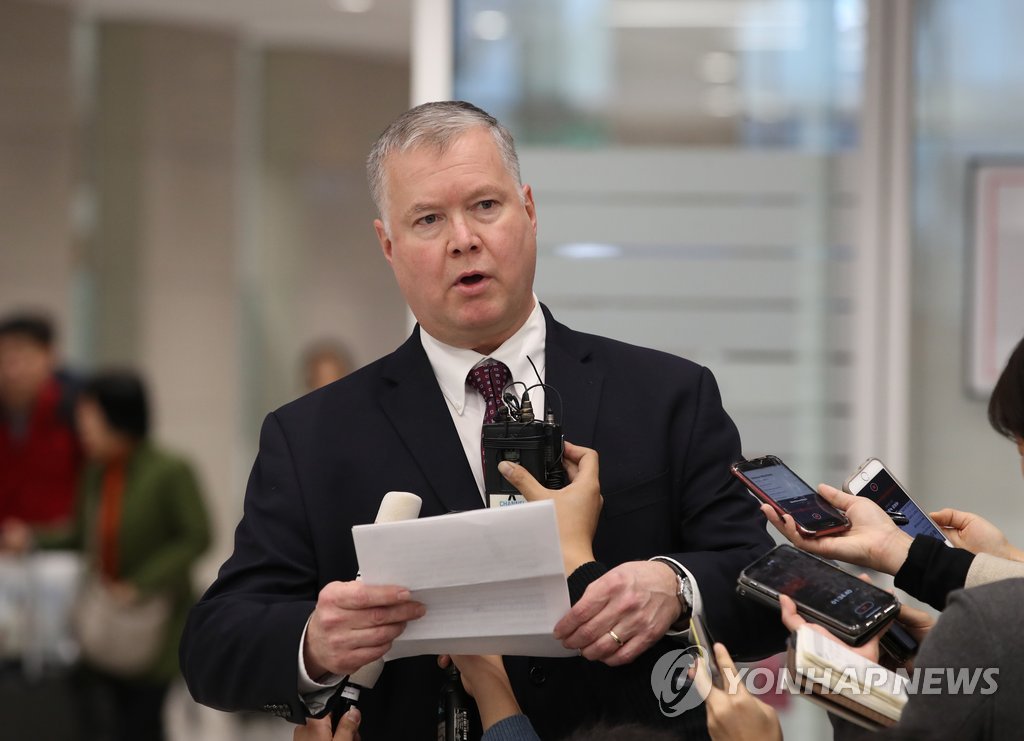 Stephen Biegun, the U.S. special representative on North Korea policy, expressed the willingness upon his arrival in South Korea on Wednesday for talks with his South Korean counterpart, saying Washington will reevaluate its ban on private and religious aid groups' trips to the impoverished country.

"We still prioritize the safety and security of Americans as we review the requests for travel, and we will continue to expect humanitarian aid organizations to be international standards for access in monitoring of their programs," he told reporters upon arrival at Incheon International Airport, west of Seoul.

"However, we also believe conditions are right for us to reevaluate how these policies are implemented, and we plan to do so early next year," he said while reading from a prepared statement.

Biegun said he will sit down with U.S. aid groups early in the new year to discuss how to "better ensure the delivery of appropriate assistance," adding that Secretary of State Mike Pompeo has directed him to review the related policy.

His remarks were seen as a carefully designed message to North Korea as part of efforts to find a compromise in Pyongyang's demand for sanctions relief and Washington's insistence on maintaining sanctions until the North takes further denuclearization measures.

It was clear that Biegun's remarks were prepared well before his departure from Washington as the envoy took out a statement and read from it. Up until then, Biegun, who took office in August, had rarely spoken to reporters at airports when he arrived in South Korea.

Providing the North with humanitarian assistance could be a face-saving way out of the impasse for both the U.S. and the North, though it is unclear if Pyongyang will find the offer satisfactory and accept it as a sort of sanctions relief and move the denuclearization process forward.

It was unclear how the U.S. came up with the idea of using humanitarian assistance as a tool to break the deadlock, but the proposal was strikingly similar to an idea that Moon Chung-in, a special adviser to South Korean President Moon Jae-in, broached early this month.

"Many American citizens wish to conduct humanitarian businesses in North Korea, but cannot due to government restrictions," the adviser has said during a lecture at Seoul National University on Dec. 3. "Relieving those restrictions could send a fairly positive message to North Korea."

South Korea has been working hard to broker a breakthrough in the stalled nuclear talks.

President Moon also said earlier this month that rewards for North Korea's denuclearization steps could include a delay or reduction of a South Korea-U.S. military exercise, humanitarian assistance or non-political exchanges, such as sports and cultural exchanges.

"The U.S. changed its position on humanitarian assistance in an effort to draw North Korea to dialogue," said Shin Beom-chul, an analyst at the Asan Institute for Policy Studies. "We have to wait and see how positively it will affect dialogue with North Korea."

Biegun's offer came as North Korea has been voicing growing frustration and criticism over the U.S. refusal to ease sanctions, with a foreign ministry-affiliated think tank warning that if Washington sticks to sanctions, it will "block the path to denuclearization on the Korean peninsula forever."

"Now, the international society is unanimous in welcoming the proactive denuclearization steps taken by the DPRK and urging the U.S. to respond to these steps in a corresponding manner," the policy research director of the Institute for American Studies of the North's Ministry of Foreign Affairs said in a statement. DPRK stands for North Korea's official name, the Democratic People's Republic of Korea.

Humanitarian activities are not banned under international sanctions, but sanctions affect such operations through a disruption of banking channels, breakdown in supply chains and delays in transportation of goods.