SEOUL, Dec. 20 (Yonhap) -- South Korea's military said Thursday it will step up efforts to reduce tensions with North Korea in the new year and make speedy preparations for the transfer of wartime operational control (OPCON) from the United States.

The Ministry of National Defense briefed President Moon Jae-in on its policy plans for 2019, which are based on its commitment to a solid readiness posture against "threats from all directions" despite ongoing peace efforts with Pyongyang.

It seeks substantive progress next year in enforcing the Sept. 19 inter-Korean military accord entailing a series of measures to reduce border tensions, prevent accidental clashes and build confidence.

To this end, it will push for consultations with Pyongyang over removing all guard posts (GPs) in the Demilitarized Zone (DMZ), following the two Koreas' demolition or disarmament this year of 11 GPs apiece.

After the armistice agreement was signed to halt the 1950-53 Korean War, South and North Korea installed some 60 and 160 GPs, respectively, near the Military Demarcation Line, though the buffer zone was intended to remain "demilitarized."

The removal of GPs is part of efforts to implement the April summit agreement between Moon and North Korean leader Kim Jong-un to transform the DMZ into a "peace zone in a genuine sense" by ceasing all hostile acts against each other in and around the area. 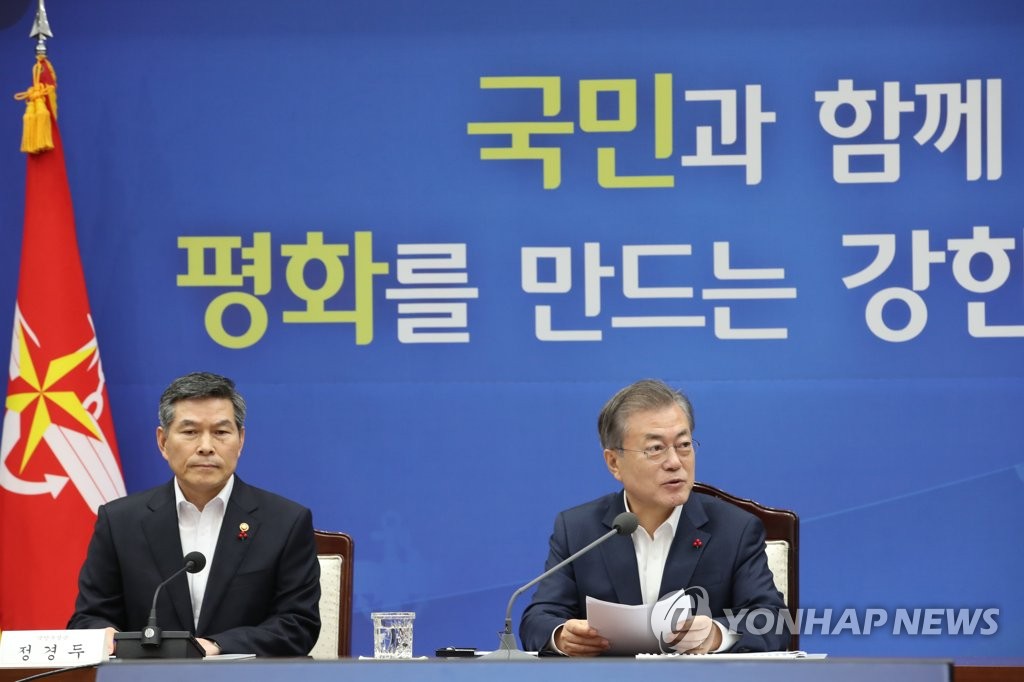 The ministry also aims to launch an inter-Korean joint military committee in the first half of next year to ensure cooperation over the September military agreement, including the creation of a maritime peace zone near the Northern Limit Line, a de facto sea border.

Under the ministry's plan, a vice ministerial representative from each side is to lead the committee and a full session will be held once every quarter.

Their military authorities will hold discussions next year over the establishment of direct communication channels between their top defense officials, such as defense ministers and chiefs of joint forces.

They will also continue preparations for a joint project to excavate war remains in the DMZ, which will be carried out from April through October. They plan to form an inter-Korean excavation team in February.

"Through the faithful implementation of the military agreement, we will lay the practical groundwork for tension reduction and trust building, with a view to supporting the goals of denuclearization and a lasting peace on the peninsula," the ministry said.

As part of preparations for the OPCON transfer, South Korea and the U.S. have a provisional plan to verify Seoul's "initial operational capability" (IOC), necessary to lead wartime operations, during their combined military exercise in August.

After IOC certification, the allies are set to verify Seoul's full operational and mission capabilities.

By August, the allies will complete documents that govern their combined defense mechanism and crisis management procedures, which will be applied after the OPCON transfer.

"Based on the robust alliance, we will systematically and actively push for the early OPCON transfer," Defense Minister Jeong Kyeong-doo told reporters after the policy briefing.

South Korea handed over operational control of its troops to the U.S.-led U.N. command during the Korean War. It retook peacetime OPCON in 1994, but wartime OPCON remains in the hands of the U.S.

Seoul was supposed to regain wartime OPCON in 2015, but this was postponed, as the allies had agreed in 2014 to a conditions-based transition in the wake of Pyongyang's nuclear and missile tests.

Regarding the plans for combined exercises with the U.S., the ministry said the allies will hold one command post exercise in the first half of next year and another in the second half.

The springtime Foal Eagle, the allies' major field exercise, is expected to be downsized.

In defense reform, the ministry plans to carry out a force structure realignment based on cutting-edge technologies, including robots, radar-evading fighters and unmanned aerial vehicles (UAVs).

In January, the military plans to launch its Ground Operation Command by merging the First and Third Army commands, an integration enabled by technological advancements that have reduced operational redundancies and allowed greater efficiency.

Under the new command, a new fire brigade equipped with multiple launch rocket systems and tactical ground-to-ground guided missiles will be installed, while a mechanized infantry division will be dissolved.

The Air Force is set to create two squadrons operating UAVs and F-35A stealth fighters, respectively. The deployment of 40 U.S.-made warplanes is slated to begin in the first half of next year and continue through 2021.

The Marine Corps will reorganize three regiments of its 1st Division into three brigade-level units as part of efforts to bolster its defense capabilities. It will also create a new battalion of special commandos tasked with supporting landing operations.

The fourth industrial revolution, a fast-paced transformation marked by the convergence of new technologies, was another key talking point at the briefing.

"If we employ core technologies from the industrial revolution such as artificial intelligence, the Internet of Things, cloud computing and big data, this will help us more transparently and stably manage defense affairs," the minister said.

In addition, the ministry briefed the president on two different proposals to introduce alternative forms of military service for those rejecting conscription due to their religious faith or other reasons.

One is to have them serve at correctional facilities for 36 months, while the other allows them to serve in other institutions such as fire services for 27 months. Currently, active-duty personnel are to serve in the Army for 18 months, in the Navy for 20 months or Air Force for 22 months.

The report, however, sparked controversy as it included a clause that allows a defense minister to reduce the service term by up to one year. Ministry officials said that the clause is just boilerplate included in all legal documents concerning the terms of such service.

During the briefing, the ministry did not mention any specific plans for its "three-axis system" designed to counter the North's nuclear and missile threats. It consists of Korea Massive Punishment and Retaliation, an operational plan to incapacitate the North Korean leadership in a major conflict; the Kill Chain pre-emptive strike platform; and the Korea Air and Missile Defense system.

The minister raised the possibility of renaming the system. Speculation has persisted that the ministry could revise it to avoid provoking the North amid peace efforts.