SEOUL, Dec. 20 (Yonhap) -- Victims of Japan's wartime forced labor and their descendants have filed a string of class-action lawsuits to demand financial compensation from the South Korean government.

The Association for the Pacific War Victims held a news conference in Seoul Thursday to announce that a total of 1,103 plaintiffs filed a fourth class action lawsuit with a local court to demand funds from the state in compensation for their or their families' forced labor under Japanese colonial rule.

About 280 forced labor victims launched three separate lawsuits in August and November of last year and April this year. 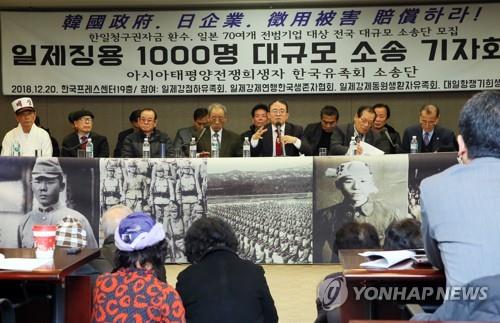 All the plaintiffs insist that Japan's grant of US$300 million, offered to South Korea's government in 1965 under the bilateral Treaty on Basic Relations, be paid to the forced labor victims and their families.

"It's time for the Republic of Korea's government to come up with responsible measures for the 1965 Japanese grant. The money used by the Korean government should now be returned to individual victims," the plaintiffs said in a statement.

They said the Seoul government has paid money only to some of the victims as consolation money, instead of distributing the $300 million grant to individuals.

They then threatened to file an additional lawsuit by about 10,000 plaintiffs to further press the government to address the compensation issue.

"Even the descendants of the victims are in their 70s and 80s and many of them struggle with financial difficulties without receiving any welfare benefits from the government," the statement said.

Separately from the lawsuits against the South Korean government, the forced labor victims and their families have been in litigation with about 70 Japanese companies.

An association official involved in the litigation said that Mitsubishi Heavy Industries and other Japanese companies should compensate Korean victims for their suffering from wartime forced labor.