SEOUL, Dec. 21 (Yonhap) -- North Korea's denuclearization process has already passed the point of no return, Seoul's national security adviser, Chung Eui-yong, said Friday, calling it one of most significant diplomatic achievements of South Korea and the United States in the year.

"The way I look at it, the denuclearization process of the Korean Peninsula has begun to enter an irreversible phase," said the head of the National Security Office at the presidential office Cheong Wa Dae.

"North Korea too believes this process cannot be reversed," Chung added while speaking with reporters.

Chung's remarks come amid an apparent tug of war between Washington and Pyongyang over when the U.S. should begin providing benefits to the communist North for its denuclearization measures.

The North has long demanded corresponding measures from the U.S. for steps it has already taken that include the shutdown of its only known nuclear test site in Punggye-ri and missile engine test site in Dongchang-ri.

A Cheong Wa Dae official later explained that Chung was only speaking in the sense that a reversal of the steps taken by the North may be difficult physically, noting such steps still need to be verified by the international community. 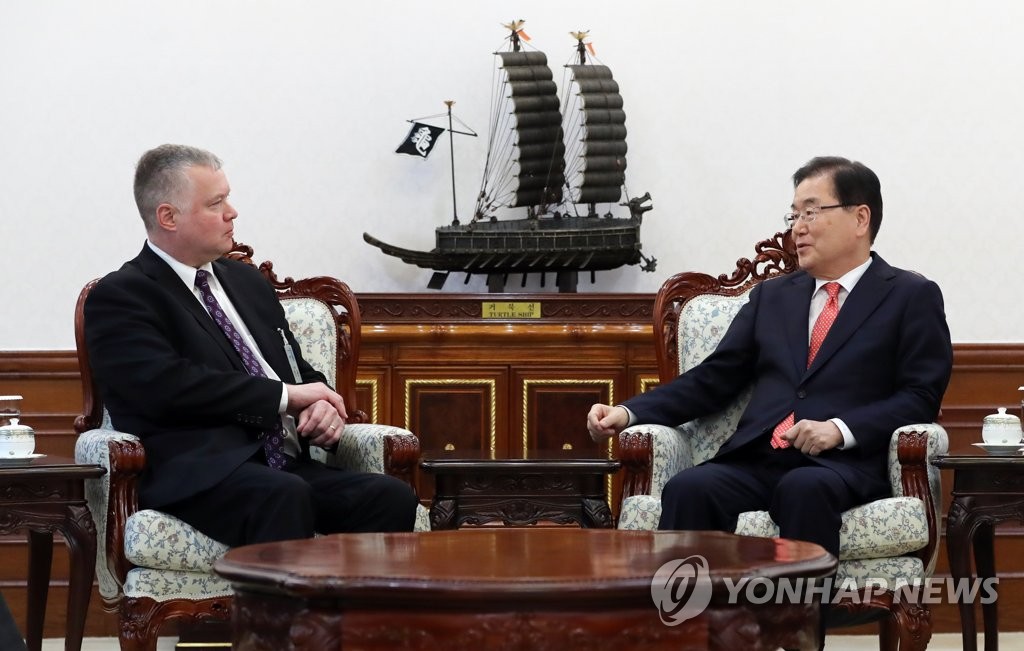 Chung insisted that the start of the denuclearization process still made the year one of the most significant years in the country's history.

"Most of all, the greatest achievement of our government this year in the international and security areas is the fact that we have eliminated the risk of war on the Korean Peninsula," he told reporters.

The top security adviser said such a change was possible because of three historic summits between President Moon Jae-in and North Korean leader Kim Jong-un, as well as the first-ever U.S.-North Korea summit between Donald Trump and Kim, held in June.

"In the past, we were used to addressing simple issues and moving on to difficult ones. Now, the order can be reversed. I believe such a change was made possible because of the top-down approach," he said.

In their very first summit held in April, Moon and Kim agreed to completely end the countries' hostility toward each other and peacefully denuclearize the Korean Peninsula.

A non-aggression pact was signed by the countries' militaries shortly after.

"This was a historic year when the leaders promised and declared that there will be no more war on this land," Chung said.

Chung also named the strong South Korea-U.S. alliance as one of the greatest diplomatic accomplishments of the year.

"I believe we not only maintain the foundation of the South Korea-U.S. alliance but also strengthened it. There have been many misunderstandings and concerns about the alliance but the cooperation system between the two remains firm. The alliance remains firm. No one will be able to deny that," he said.