SEOUL, Dec. 24 (Yonhap) -- The number of foreigners who arrived in South Korea jumped 23.5 percent in November from a year earlier due to a base effect after visits by Chinese tourists plunged in 2017, the local tourism promotion agency said Monday.

A total of 1.35 million foreigners visited South Korea last month, up from 1.09 million tallied the same month a year earlier, according to the Korea Tourism Organization (KTO).

The number of Chinese tourists, among others, shot up 35.1 percent.

In the first 11 months of the year, the number of foreign visitors to the country reached 14.02 million, marking a 14.9 percent rise from the same period in 2017.

Meanwhile, the number of outbound South Korean tourists came to 2.29 million in November, up 3.1 percent from a year ago, it said. 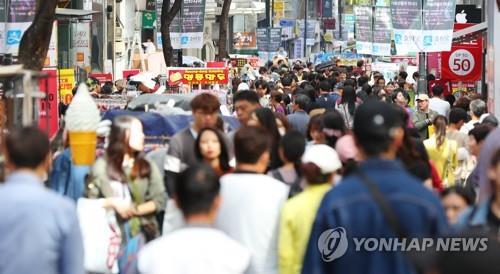 Number of foreign tourists arriving in S. Korea up 23.5 pct in Nov.

Number of foreign tourists arriving in S. Korea up 23.5 pct in Nov.