SEOUL, Dec. 25 (Yonhap) -- South Korean and U.S. officials had significantly narrowed differences in recent negotiations over how to share the upkeep costs for American troops stationed here, but the working-level progress fell apart as the U.S. leadership rejected it, sources said Tuesday.

Seoul and Washington have held a series of talks since March over how much financial cost South Korea should bear for 28,500 troops of U.S. Forces Korea amid U.S. President Donald Trump's call for a sharp rise in Seoul's share.

Earlier this month, the two sides tried to reach a final deal on the issue during the 10th round of negotiations held in Seoul and narrowed differences to a gap of about 100 billion won, but the progress fell through as the U.S. leadership opposed the idea.

A government source said, "We are nearly back to square one."

The two couldn't even schedule the timing of the next round of meetings, as both apparently needed time for policy coordination and consultation within their own governments. 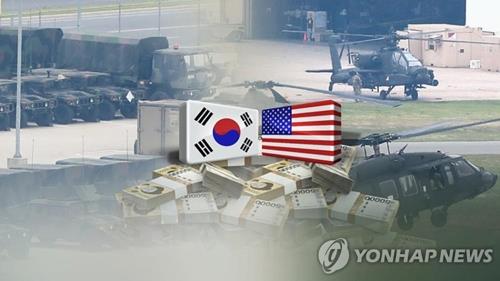 U.S. President Donald Trump has reiterated his position that U.S. allies should shoulder a heavier burden.

On Monday, he wrote on Twitter that, "We are substantially subsidizing the Militaries of many VERY rich countries all over the world, while at the same time these countries take total advantage of the U.S., and our TAXPAYERS, on Trade. General Mattis did not see this as a problem. I DO, and it is being fixed!"

Although he didn't pinpoint South Korea, it is understood that he directed the comment at Seoul, with which the U.S. is currently negotiating over defense costs.

The current five-year accord between the two expires at the end of this month.

If the negotiations get prolonged, it could have a negative impact on paying South Korean workers inside American military bases. About a third of Seoul's payment is used for the wages of around 8,000 workers. The USFK has reportedly warned that they may be forced to go on unpaid leave, apparently putting pressure on South Korean negotiators.
(END)