SEOUL, Dec. 27 (Yonhap) -- North Korean Vice Railway Minister Kim Yun-hyok briefly raised the eyebrows of conservatives in South Korea as he was misquoted as saying the Koreas should seek unification through a "federation," a formula long considered part of Pyongyang's attempt to communize the Korean Peninsula.

The misquoting happened when Kim delivered a celebratory speech during a groundbreaking ceremony Wednesday for a project to modernize North Korean railways and connect them to those in the South under a summit agreement between President Moon Jae-in and North Korean leader Kim Jong-un.

Only about a dozen South Korean reporters, including photographers and camera crews, were allowed to travel to Panmun Station in the North's border city of Kaesong to cover the ceremony as pool reporters. Other reporters back in Seoul relied on pool reports for details of the event.

The North's vice rail minister was quoted as saying during the celebratory speech, "Whether to make an achievement in the North-South railway and road project depends on our people's determination and willingness. A unified federation that Korean people want cannot be realized ever if we mind how others think."

The word "federation" got the attention of many in South Korea because it has long been associated with the North's attempt to unify the divided peninsula under its communist terms. It later turned out, however, that Kim never said the word.

What Kim actually uttered was "yeolmang" in Korean, which means burning hope or yearning, but he was misquoted as saying "yeonbang," which means federation. A leading conservative newspaper in South Korea ran a story about Kim talking about a "unified federation" on its front page Thursday.

Kim's correct quote should have been, "Whether to make an achievement in the North-South railway and road project depends on our people's determination and willingness. Our people's burning hope for reunification cannot be realized ever as long as we mind how others think and hesitate."

The incident underlined the deep skepticism and misgivings that conservatives in South Korea have about the communist neighbor even as the peace process between the two sides has been under way in earnest, with their leaders meeting three times this year alone and their militaries tearing down border guard posts. 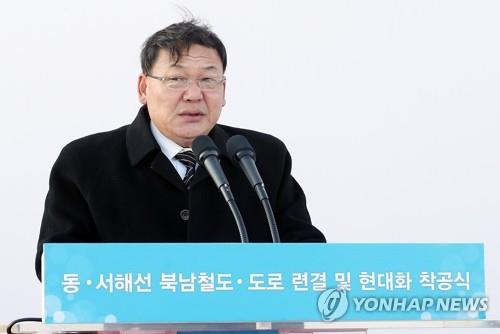 Bringing the Koreas under one federation has been North Korea's unification formula for more than a half century since the country's founding leader Kim Il-sung, grandfather of the current leader, first broached it in 1960.

It is a gradual process that calls for the two sides to keep their systems and governments, and form a federal organization to represent the country to the international community. Conservatives in South Korea have long viewed it suspiciously as an attempt by the North to communize the South.

The South's unification formula has been to unite the two sides through a confederation like the European Union, under which the two countries keep their governments, systems and sovereignty, but cooperate more closely toward unification.

Both formulas have a similarity in that they call for a gradual approach.

The formulas appeared in a joint document of the two Koreas in 2000, when the two sides held their first-ever summit between then South Korean President Kim Dae-jung and North Korean leader Kim Jong-il.

"For the achievement of reunification, we have agreed that there is a common element in the South's concept of a confederation and the North's formula for a loose form of federation. The South and the North agreed to promote reunification in that direction," read the June 15 Joint Declaration adopted at the summit.
(END)

N.K. official misquoted as calling for unification under Pyongyang's terms

N.K. official misquoted as calling for unification under Pyongyang's terms