Kim's main responsibility will be to fill in the managerial vacancy at the national team following the resignation of Sun Dong-yol last month.

The Premier 12, scheduled for November 2019 as a qualifying event for the 2020 Tokyo Summer Olympics, will be the first major competition for the new national team bench boss.

Kim, 59, was one of the KBO's best starting pitchers in the 1980s and was the first pitcher in the South Korean league to reach 100 career wins. 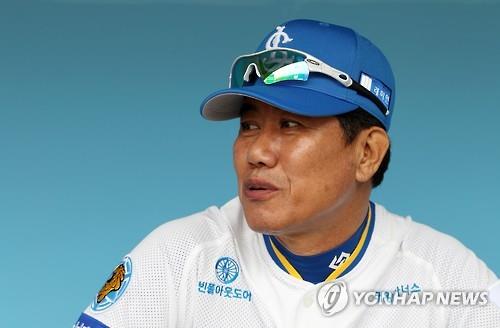 In his post-playing career, Kim managed the Hyundai Unicorns, Woori Heroes and Lotte Giants. He was the head of the KBO's game operations committee in 2018.

Kim has also played vital roles on previous national teams. He was the pitching coach when South Korea won gold at the 2010 Asian Games and helped South Korea capture the inaugural Premier 12 in 2015 as the chief advance scout.

The national team program is in shambles after Sun, South Korea's first full-time national skipper, quit in the aftermath of a roster controversy at the 18th Asian Games in Indonesia this past summer.

Sun and his coaching staff put together the team for the Asian Games, a departure from the early practice where the technical committee, usually headed by a former KBO club manager, exercised more power and picked teams for previous international tournaments.

But Sun and his staff faced heavy criticism for picking what many felt were undeserving players based on their military status. Those skeptics said the manager selected such players to do them personal favors, because winning an Asian Games gold medal grants male athletes exemptions from mandatory military service.

When called in to testify in the National Assembly during a parliamentary audit in October, Sun defended his choices and insisted the manager's rights to assemble a team had to be respected.

In announcing the new appointment, the KBO said it recognized Kim's contributions to the national team in the past and his communication and networking skills should help bring more stability to the program.

"I feel a lot of pressure on my shoulders, taking on such an important job at this important juncture," Kim said in a statement released by the KBO. "I accepted the offer because I wanted to help South Korean baseball in what small way I can."

The KBO said Kim will pick six members of the new-look technical committee "as soon as possible." It said there will be one non-former player "with a deep interest in and understanding of baseball."