According to Statistics Korea, the central bank and the Financial Supervisory Service, local households with debt paid lenders 16.37 million won (US$14,650) to pay back interest and principal in 2017. This represents a 8.1 percent increase vis-a-vis the year before.

In comparison, the disposable income of households with debt stood at 52.71 million won for a gain of 2.7 percent from the year before.

The ratio of debt service to money that a household can spend stood at 31.1 percent last year, up 0.6 percentage point from 29.5 percent in 2016. 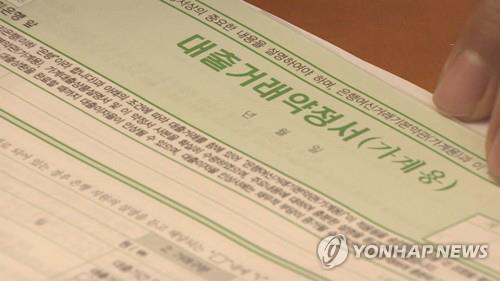 "In effect, such households spent a third of the money that they can spend, not counting taxes and social security payments, to cover their dues," a statistical agency official said.

He added that while the pace of growth for debt has tapered off, thanks in part to tougher lending rules, the repayment burden has steadily increased with time.

In 2011 the average repayment burden for a household stood at 8.87 million won per annum, but from 2012 through 2015 it grew by double digits before falling off slightly in 2016, when the country's key interest rates was fixed at 1.25 percent.

From 2011-2017, debt repayment cost shot up 84.6 percent, with the burden associated with paying back lenders outpacing earnings by some 6.8 times.

Market watchers said the decision by the Bank of Korea (BOK) to raise interest rates for the first time in a year last month could accelerate debt servicing costs, spelling trouble for the domestic economy.

In a recent report, the BOK said the rise in the key rate will invariably lead to greater burden for households, especially for those that borrowed from the nonbanking sector and those that took out personal loans.

The central bank on Nov. 30 marked up the country's policy rate by a quarter percentage point to 1.75 percent, the highest in 3 1/2 years.
(END)