The company said its T Map Taxi service had some 1.205 million monthly active users (MAUs) in December, up sharply from just 93,000 in October.

It said that, with the total number of people using taxi apps in the country estimated at 6.5 million, one in five is using its services.

"The latest tally far exceeds the company target of 1 million MAUs by the end of 2018," SK Telecom said. It added that as of Saturday, the number of cab drivers that have signed onto the app topped 150,000, or 56 percent of the 270,000 total. This too mark a sharp increase as there were only 30,000 taxi drivers using the app in late June of this year.

The company claimed part of the reason for the increase in users has to do with its T Map Taxi providing live tracking features so that users can make certain that another person has reached their destination safety. The SK Telecom system, moreover, offers discounts on taxi fares for those using its services.

On the other hand, market watchers said that the sudden popularity is directly related to the controversy surrounding Kakao Corp.'s ride-hailing service that has drawn intense fire from local taxi drivers.

There have been severe conflicts over Kakao's T Carpool, a ride-sharing service by South Korea's top mobile messaging provider, as taxi drivers view it as a system that will drive them out of business. Thousands of taxi drivers have staged protests against Kakao for threatening their livelihood, which has hurt that service in the eyes of drivers and some passengers. 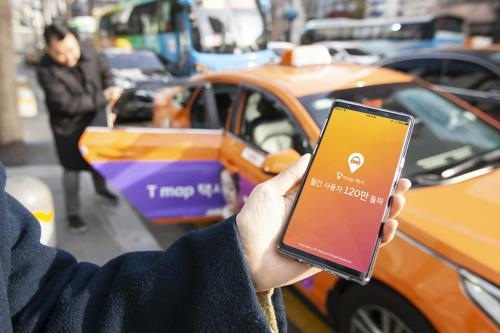