ABU DHABI, Dec. 31 (Yonhap) -- When the New Year dawns, Paulo Bento, head coach for South Korean men's national football team, will be neither in his native Portugal nor in his adopted country to celebrate the occasion.

The 49-year-old coach will be hard at work here in Abu Dhabi, where South Korea are preparing for the Asian Football Confederation (AFC) Asian Cup kicking off in a few days across the United Arab Emirates (UAE). The buildup will include a friendly against Saudi Arabia, which starts at 1 a.m. on New Year's Day, Seoul time.

As well as South Korea have done in international football, having played at each of the past nine FIFA World Cups, the Asian Cup has proven to be a far different animal for the Taeguk Warriors. 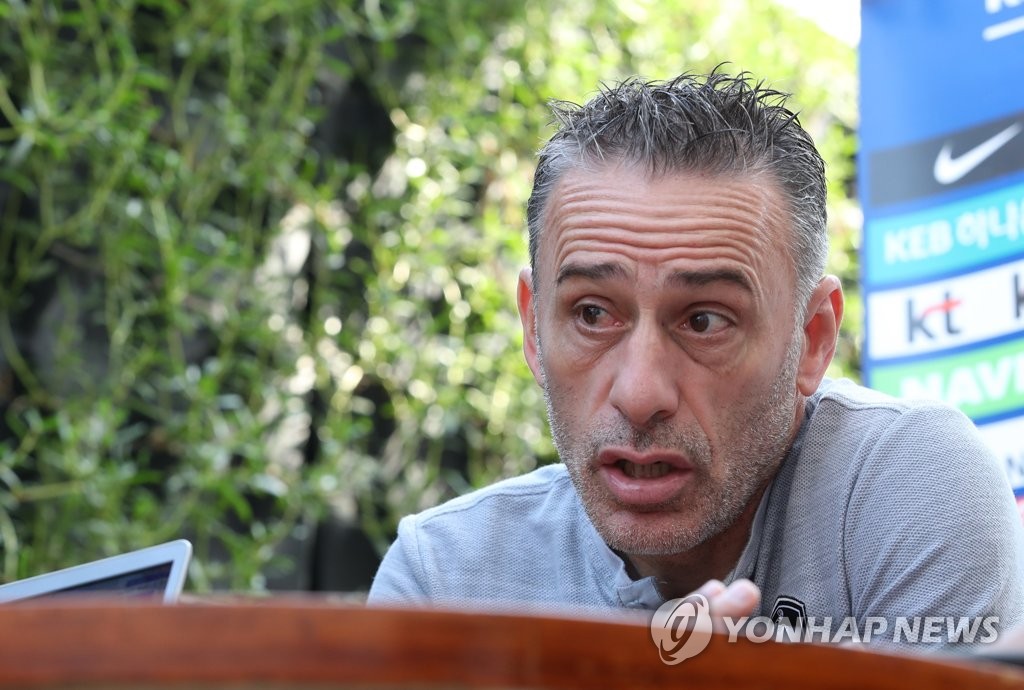 South Korea won the first two editions of the continental tournament, in 1956 and 1960, and have been shut out since.

In an interview with Yonhap News Agency on Sunday in Abu Dhabi, Bento said he'd like nothing more than to end that decades-long drought to start 2019.

"My biggest wish for the new year is to get off to a good start at the first tournament of the year and to have a good finish as well," Bento said. "We all have new year's resolutions. And mine is to do well at the Asian Cup. In addition, I hope all the Korean people will have a peaceful and prosperous year."

South Korea are in Group C at the Asian Cup, and will face the Philippines (Jan. 7), Kyrgyzstan (Jan. 11) and China (Jan. 16). There are 24 teams divided into six groups of four, and the top two nations from each group, plus the four best third seeds, will reach the round of 16.

South Korea, as the team with the highest global ranking in Group C at No. 53, should have little trouble making it out of the group stage. The real battle will start in the knockout phase.

"We shouldn't put too much pressure on ourselves just because we haven't won the Asian Cup for a long time," Bento said. "We should try to stay positive and tell ourselves we can get it done this time. But I've also been telling the players that there are other title contenders, so that we won't get overconfident about our chances."

South Korea are undefeated in six matches (three wins and three draws) under Bento, who took over the team in August. Bento said he felt South Korea, despite reeling from another a quick group stage exit from the World Cup, had enough talent to dominate matches, and his job was to bring out the best in them and get everyone on the same page. 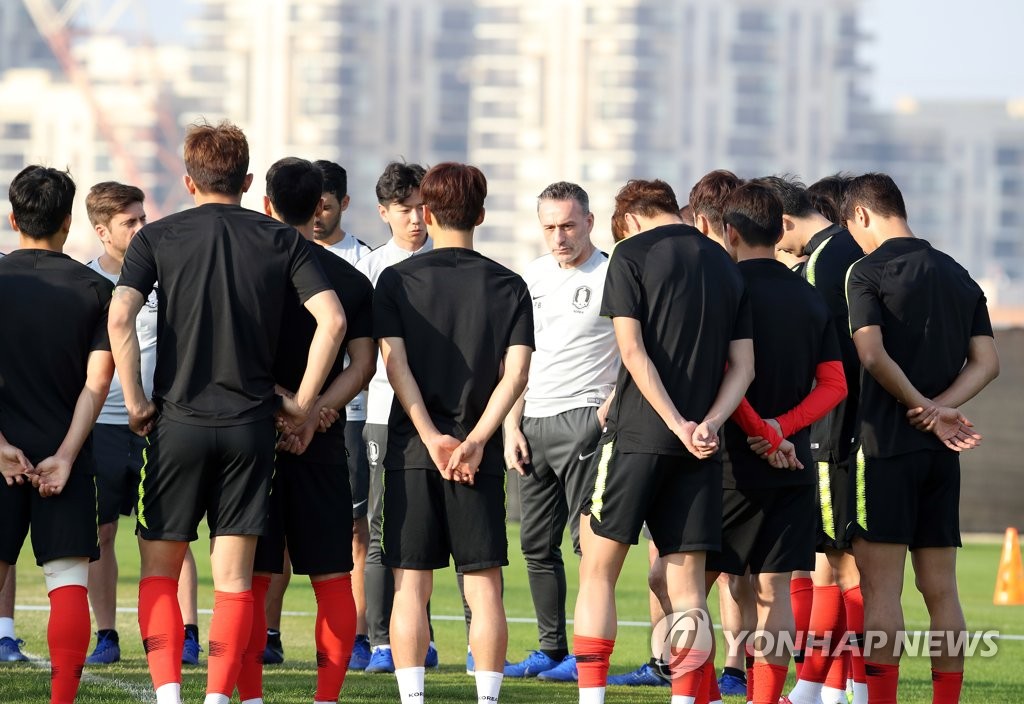 "We've had our obstacles, but I think the players have responded well to my challenges," Bento said. "I've called on these players to improve their ball possession rate and dominate the opponents. They've grasped that concept well."

Bento was still playing for Portugal and his team faced co-host South Korea in group stage at the 2002 World Cup. South Korea stunned the heavily-favored Europeans 1-0 to advance to the round of 16 for the first time.

Bento said it was difficult to compare South Korean football between then and now because of how much time has passed, but the one constant has been the players' sheer drive.

"Most players are technically sound, and the big positive is that they've all tried to show their mental toughness," the coach said. "The most important thing at this point is to make sure all of our practices will help South Korean football in the long term."

In the short term, Bento will have to manage at least the first two group matches without his biggest offensive weapon, Son Heung-min of Tottenham Hotspur. 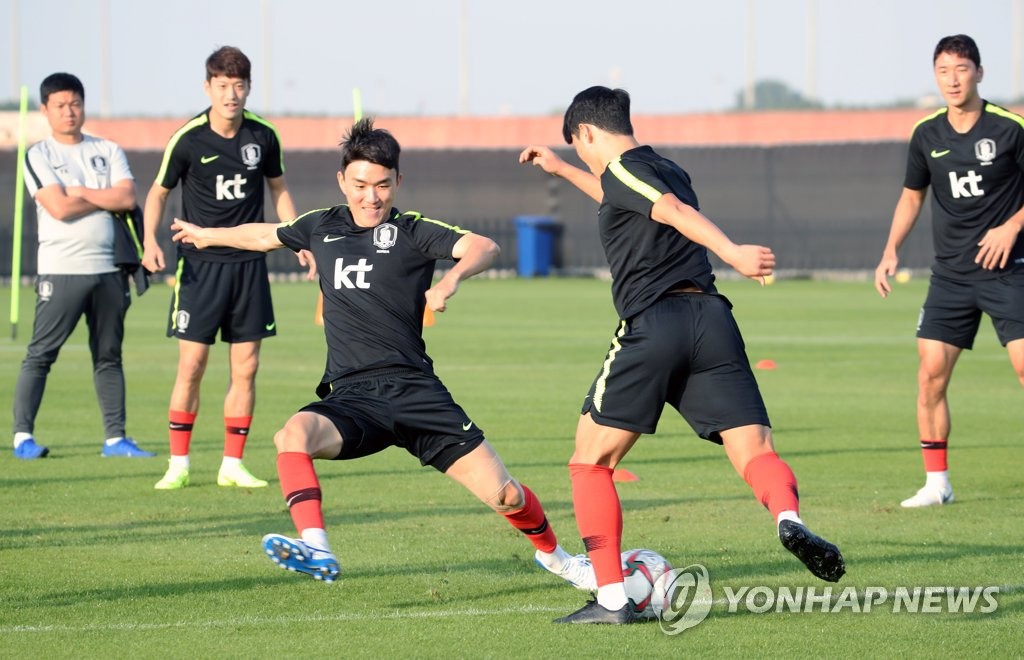 Son has been on fire in the Premier League, with six goals in December, but he won't join the national team until Jan. 14. Under a prior agreement with the Korea Football Association (KFA), the Spurs made Son available for the Asian Games in August in Indonesia, in exchange for keeping him in the Premier League for a pair of November friendly matches and the first two Asian Cup matches.

And Bento said he'll have to check Son's physical condition once he arrives in the UAE before determining whether he'll face China.

"His early absence was something that was determined before I became the coach, and so I can't change anything about that," Bento said. "We have to fill that void with tactical changes, and other players have to step up. And the key is to maintain our tactical principles and philosophies even as we make those adjustments."