Controversy has flared up after Kim Tae-woo, a former special investigator at the presidential office, made the revelation that he had collected information, including info about civilians and former bureaucrats who should not be subject to Cheong Wa Dae surveillance.

Surveillance of civilians has been a sensitive issue in South Korea as former conservative governments were blamed for illegally spying on citizens for political purposes.

It marked the first time since 2006 that a presidential secretary for civil affairs spoke at the parliamentary panel.

The revelation came after Kim was forced to return to his original post at the prosecution last month over an allegation that he sought to influence a police probe into a corruption case involving his acquaintance.

"The bottom line is that as Kim has become almost certain to face disciplinary actions due to his irregularities, he crafted a rare hoax by distorting the due work process into a political issue and trying to cover up his misconduct," Cho told lawmakers.

The presidential civil affairs team under the Moon government has not surveilled civilians or drawn up blacklists (of people critical of the government) unlike other previous administrations)," he stressed. 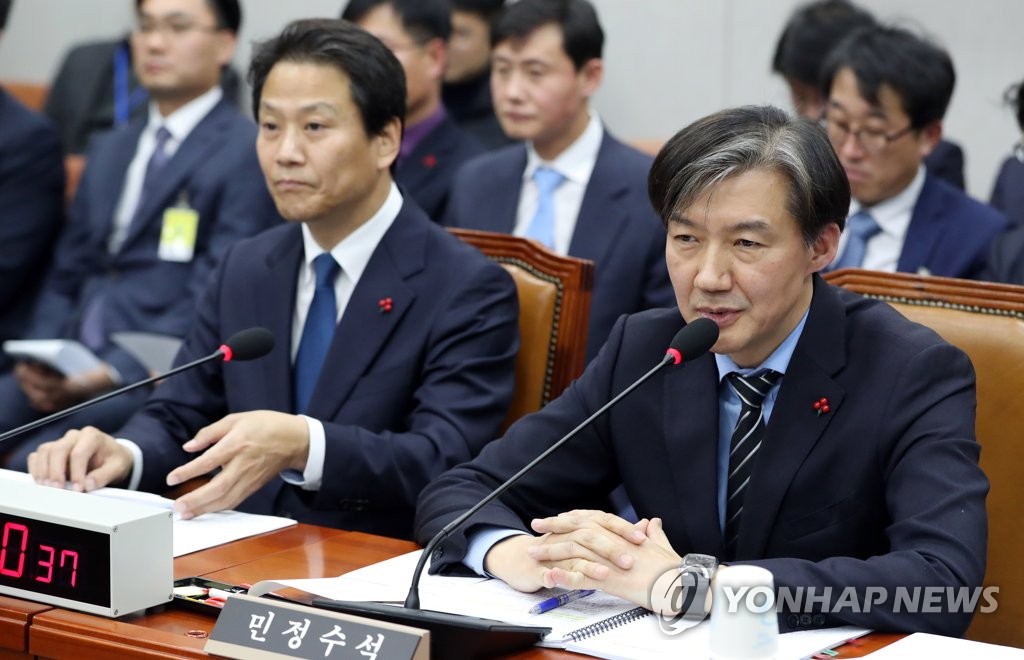 Im also echoed such a view.

"There has been no surveillance (of civilians) for political purposes under the Moon Jae-in administration," he told lawmakers.

"I feel unlimited responsibility. I will take responsibility for this as the chief of staff at any time," he said, apologizing to the public.

Since Cheong Wa Dae ordered him to return to the prosecution over alleged irregularities, Kim has released various information he claims to have obtained.

He claimed that he surveilled civilians on direct orders from his superiors at Cheong Wa Dae, an accusation strongly denied by the presidential office.

President Moon called on Im and Cho last week to speak at a meeting of the steering committee over the scandal as opposition parties sought to link the issue to the passage of a bill aimed at strengthening safety measures for temporary or contract workers.

The main opposition Liberty Korea Party (LKP) said that the core part of the controversy is that the liberal Moon government surveilled civilians. The party called on Cho to step down.

But the ruling Democratic Party (DP) slammed the LKP for using the issue as a political offensive, saying the controversy erupted due to Kim's deviant act.