SEOUL, Dec. 31 (Yonhap) -- A viral quip from South Korea's women's curling team at the PyeongChang Winter Olympics has been chosen as the word of the year, a pollster said Monday.

In a poll of 503 South Korean adults nationwide, conducted by pollster Realmeter on Friday, 18.5 percent, the largest portion, selected "Yeong Mi," a chant shouted by curling team skip Kim Eun-jung throughout the Olympics games to encourage teammate Kim Yeong-mi, as the most impressive word of this year.

The South Korean female curlers advanced to the final after a string of victories over the world's top teams. They lost to Sweden in the final but won South Korea's first Olympic curling medal.

The poll, conducted at the behest of local broadcaster CBS, has a margin of error of plus or minus 4.4 percentage points and a confidence level of 95 percent. 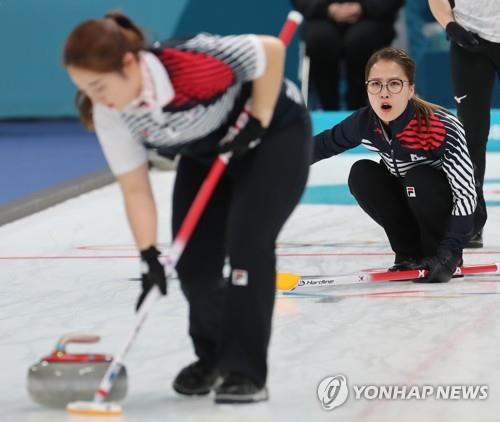 A sarcastic comment from Hong Joon-pyo, a former chairman of the main opposition Liberty Korea Party, in response to the presidential office Cheong Wa Dae's shipment of 200 tons of Jeju Island tangerines to North Korea in November, was chosen by 12.4 percent of the respondents to rank second in the world of the year survey.

Hong cynically asked in social media "Are there only tangerines in the shipments of tangerines?", raising suspicion about the existence of other secret gifts to the North.

Realmeter said 11.9 percent of respondents picked "Who do I blame?", a sentence from the suicide note of former opposition lawmaker Roh Hoe-chan who took his own life in July over allegations of bribery.

Cheong Wa Dae's condemnation of former presidential office inspector Kim Tae-woo, who confessed to spying on civilians, as a "loach" was ranked fourth with 11.6 percent.

"It's wrong to say Pyongyang is far (from the border)," a famous comment by North Korean leader Kim Jong-un during the inter-Korean summit at Panmunjom on April 27, was also included in the top-five phrases of the year with 10.9 percent.

Other expressions ranked between sixth and 10th included "I'm Kim Yong-gyun," a slogan in support of a subcontract worker who was killed in a power plant accident, (6.2 percent), "Don't worry" said by former South Chungcheong Gov. An Hee-jung to his alleged sex assault victim (6.2 percent), and "Love Yourself" by boy band BTS (5.8 percent). 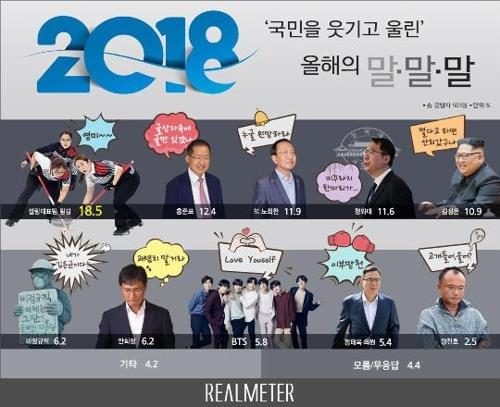