SEOUL, Dec. 31 (Yonhap) -- The head of South Korea's professional baseball on Monday issued an apology to fans for a tumultuous year marred by a series of incidents on and off the field.

Chung Un-chan, commissioner of the Korea Baseball Organization (KBO), also said the year 2019 will be the one of "painful" changes.

"In 2018, South Korean baseball and the KBO disappointed our fans a great deal," Chung said in a statement released by his office. "We may have accomplished some great feats on the field. But unfortunately, we've had several incidents happen in and around the league, and I failed to properly gauge public sentiment. I apologize to the people from the bottom of my heart for causing so much trouble."

Chung, a former prime minister long known for his love of baseball, became the commissioner in January this year. On his watch, the KBO drew more than 8 million fans for the third consecutive season, and South Korea won its third straight gold medal in the Asian Games with a team built with KBO's All-Stars. 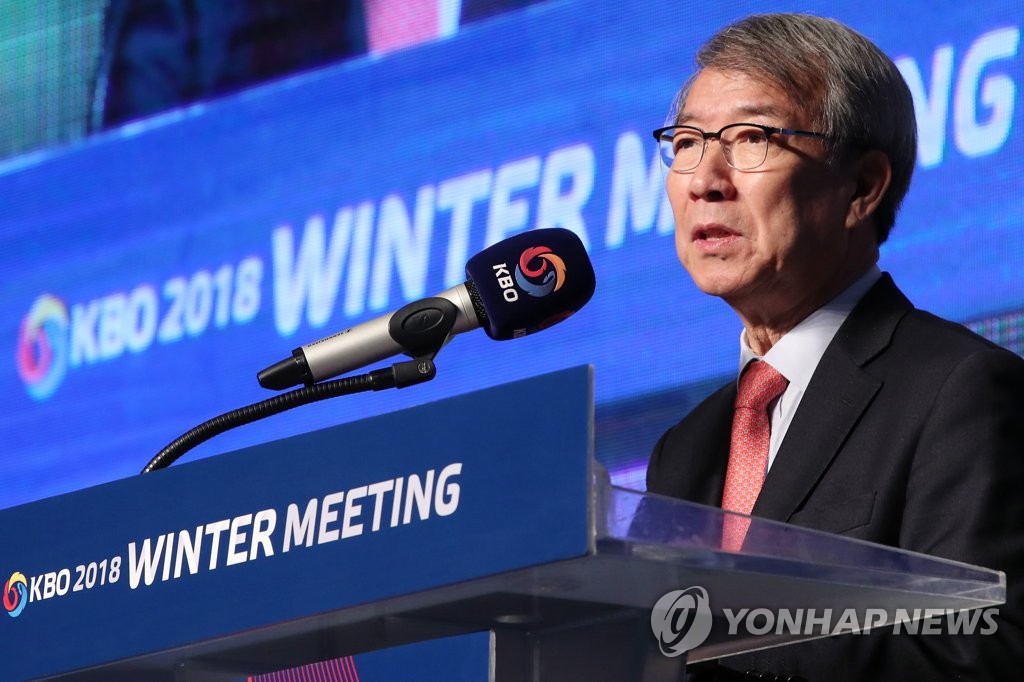 But the league also dealt with some major controversies. In May, two players for the Nexen Heroes, pitcher Cho Sang-woo and catcher Park Dong-won, were accused of sexually assaulting a woman during a road trip. Later the same month, the Heroes were belatedly found to have made several illegal player-for-cash trades. They were fined 50 million won (US$44,970) and were forced to cough up another 600 million won made in improper deals.

Despite capturing gold at the Asian Games, South Korea wasn't celebrated as a champion at home. Manager Sun Dong-yol faced heat for questionable roster choices, with critics claiming that he'd selected some undeserving players just to help them receive military service exemptions with an Asian Games gold medal. Sun was called in to testify on the situation during a parliamentary audit in October, and the first full-time manager for the national baseball team stepped down unceremoniously in November.

Chung was summoned to a separate parliamentary audit in October, and he was criticized for throwing Sun under the bus. Chung told lawmakers that he didn't feel South Korea needed a full-time skipper, and Chung also openly questioned Sun's roster choices.

Chung said the past 12 months have felt like 10 years to him, with these incidents keeping him up many nights. He also said the roller-coaster of a year provided him with some valuable lessons.

"I now have a clear idea of what I have to do as the KBO's commissioner and what my social responsibilities are," he said. "I promise you that the new year will bring in revolutionary changes. And I fully understand these changes will be painful."

Chung said he'll continue to try to bring more transparency and fairness to the KBO.

"We'll not cover up any wrongdoing, and we'll do our best to prevent recurrences (of past mishaps) through strict punishments and continued education," he said. "We'll also look to improve our free agency and draft systems, and become a fan-friendly league."

The pressing task for South Korean baseball is to name Sun's replacement on the national team. The KBO previously said it'll appoint the new skipper before the end of January at the latest. Then in November, South Korea will compete in the Premier 12, the first opportunity for the world's top 12 teams to qualify for the 2020 Tokyo Olympics. Seoul's Gocheok Sky Dome is scheduled to host preliminary games during the Premier 12. South Korea won the inaugural Premier 12 in 2015.

"The Premier 12 is a critical tournament that will determine the future of our baseball," Chung said. "We'll put together a team that you can all get behind and support, and do the best we can to be a successful host of the preliminary round."