ABU DHABI, Dec. 31 (Yonhap) -- South Korea played Saudi Arabia to a scoreless draw on New Year's Eve in their final tuneup match before a major continental football tournament starting next week, failing to record a shot on net in a lackluster offensive performance.

Midfielder Ki Sung-yueng missed a penalty in the second half for South Korea, as the largely dull match ended 0-0 at Baniyas Stadium in Abu Dhabi. South Korea have been training here since last week in preparation for the Asian Football Confederation (AFC) Asian Cup.

The United Arab Emirates (UAE) will host the quadrennial tournament from Jan. 5-Feb. 1. South Korea are in Group C at the Asian Cup, and will face the Philippines (Jan. 7), Kyrgyzstan (Jan. 11) and China (Jan. 16).

South Korea, world No. 53, will chase their first Asian Cup title since 1960. 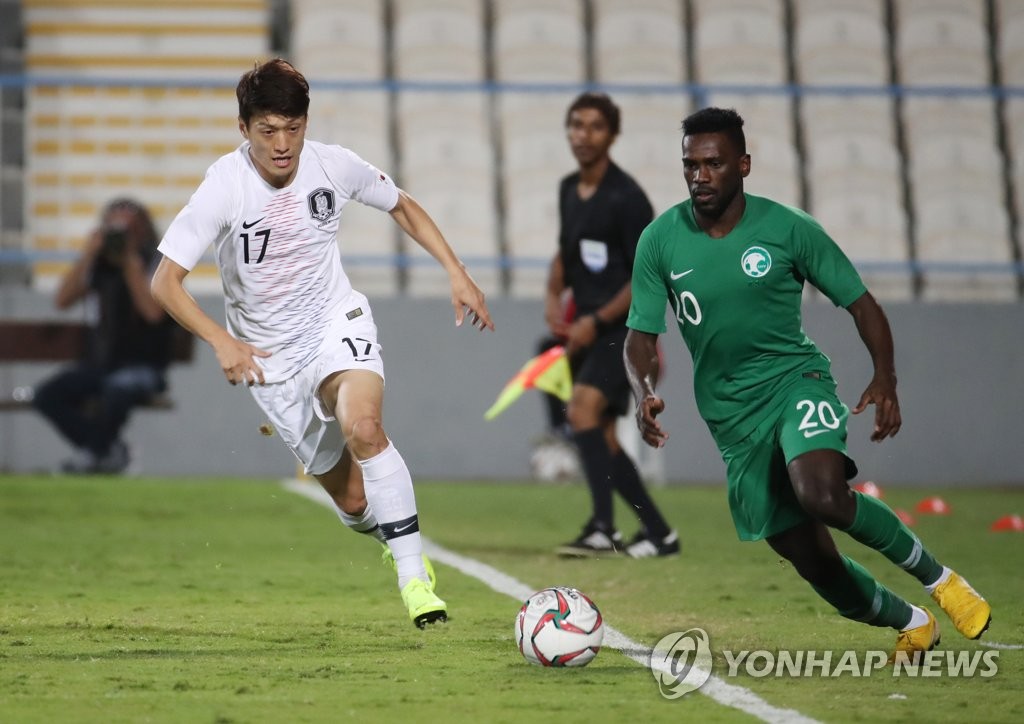 Saudi Arabia, ranked 69th in the world, will also compete at the Asian Cup. They are in Group E with Qatar, Lebanon and North Korea.

There are 24 teams divided into six groups of four at the Asian Cup, and the top two nations from each group, plus the four best third seeds, will reach the round of 16. South Korea and Saudi Arabia could potentially clash in the quarterfinals.

In Monday's friendly, Bento opted for a back-three formation for the first time in his tenure with a 3-4-2-1 setup, after using a 4-2-3-1 formation in his first six matches with South Korea. Lee Yong, normally a defensive back, started as the right wing back.

Saudi Arabia opened the salvo in the eighth minute, when midfielder Salem Al-Dawsari fired one high and wide. About five minutes later, South Korean midfielder Hwang Hee-chan got behind the defense for a shot that bounced wide of the far post.

But for an extended stretch that followed, neither side generated much in the way of offense. South Korea in particular were frustrated by Saudi Arabia's pressing tactics and had trouble moving the ball out of their own zone.

In the 22nd minute, right back Mohammed Al-Breik sent a cross intended for forward Abdulaziz Al-Bishi, but defender Kim Min-jae cleared it out of harm's way.

About 10 minutes later, South Korea had their best opportunity of the match, thanks to a pretty passing play by three unrelated Hwangs.

With South Korea in control in the Saudi box, Hwang In-beom played a neat give-and-go with Hwang Hee-chan, who crossed for Hwang Ui-jo standing alone at the goalmouth. But the high-scoring striker couldn't complete the tic-tac-toe play, as he just missed the net to his left. 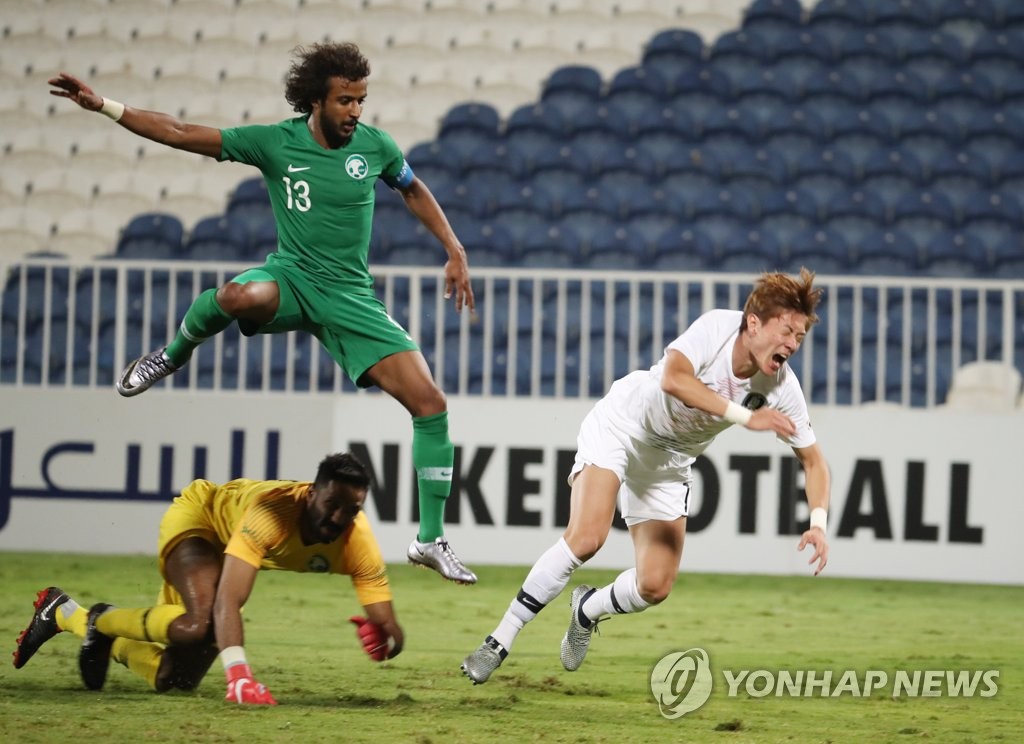 Saudi Arabia tried to answer back in the 35th minute, when Fahad Al-Muwallad tested goalkeeper Kim Seung-gyu with a low shot from the left edge of the box.

Hwang Ui-jo had another close call in the 42nd minute, when he took a shot from the top of the arc and missed it to the left.

South Korea came back out with a bit more bounce to their steps in the second half, but nothing came out of it.

In the 56th, Hwang Hee-chan headed a pass to Hwang Ui-jo, but the forward went off target again and collided with the charging goalkeeper Mohammed Al-Owais.

Second-half sub Ji Dong-won went on a fast break with Ki in the 74th, but their two-man play resulted in Ki's shot hitting the right side of the net.

Ki had an opportunity to redeem himself in the 81st. He drew a penalty when he was tripped up by Al-Owais, who came sprinting out of his position to meet a Hwang Hee-chan pass.

Ki stepped up to take the shot himself but rolled the shot wide left of the net as Al-Owais dove in the opposite direction.

That was the last dangerous opportunity for South Korea, who were without Son Heung-min.

The in-form offensive star for Tottenham Hotspur is scheduled to join the national team on Jan. 14. Under a prior agreement with the Korea Football Association (KFA), the Spurs made Son available for the Asian Games in August in Indonesia, in exchange for keeping him in the Premier League for a pair of November friendly matches and the first two Asian Cup matches.