But Kim's demand for corresponding measures, and an apparent threat to seek an alternative course if the U.S. continues its sanctions and pressure, could hold the two sides back from making any immediate breakthrough in the stalemate, they worried.

"(Kim) threatens that North Korea could take a new way but the emphasis appears to be placed on the denuclearization part," said Choi Yong-hwan, a senior researcher at the Institute for National Security Strategy, a think tank affiliated with South Korea's spy agency, the National Intelligence Service.

"He said that he could hold a summit with the U.S. at any time. The preparations for the summit could gain traction going forward," he added.

Kim's address was closely watched for any signs that could jump-start Pyongyang's denuclearization talks with Washington that have been all but stalled since their first-ever June summit in Singapore. At that meeting, Kim promised to complete denuclearization of the Korean Peninsula in return for security guarantees from the U.S.

The impasse has dragged on for months as North Korea wants sanctions relief in return for what it claims to be meaningful denuclearization steps, including the dismantling of its nuclear test site and the suspension of nuclear detonations and missile launches since late 2017. Washington demands more concrete steps.

"I am always ready to sit down again with the U.S. president at any time and will make efforts to produce an outcome that the international community would welcome," Kim said in the speech broadcast by the country's state TV.

"(But) we could be left with no choice but to seek a new way if the U.S. does not make good on its promises, misjudges our patience, while seeking to force things unilaterally and clinging to sanctions and pressure," he added. 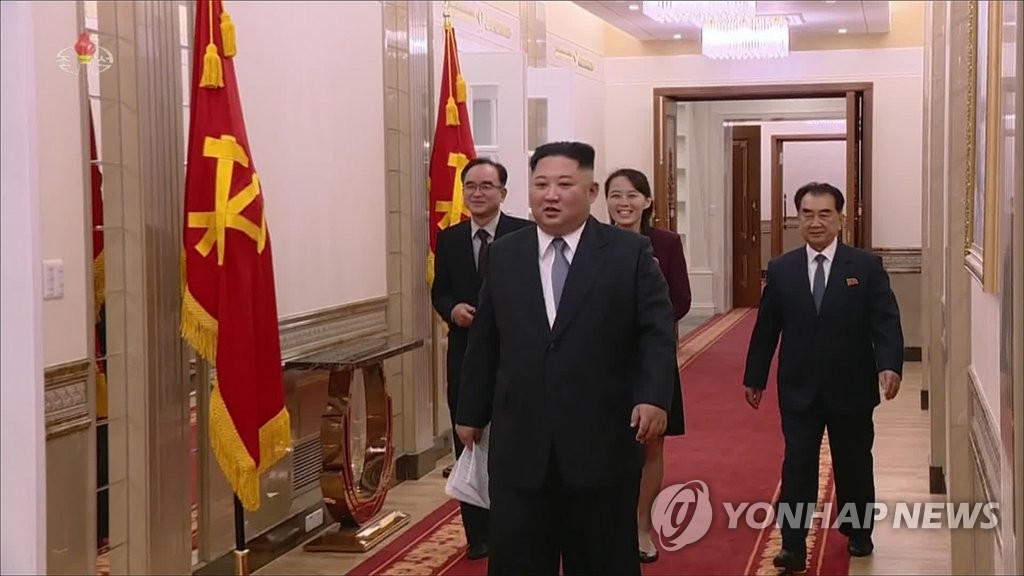 Kim also said that he is willing to reopen the now shuttered Kaesong industrial park and Kumgang tour program "without conditions," apparently indicating that they could be part of his demands for sanctions relief.

The industrial park in the North's border town of Kaesong and the tour program to the mountain on the North's east coast are two symbolic cross-border projects. They came to a halt in 2016 and 2008, respectively, amid fraying inter-Korean relations.

In their September summit in Pyongyang, Kim and South Korean President Moon Jae-in agreed to "normalize" them as soon as relevant conditions are met. But little progress has been made ever since amid worries over possible violations of sanctions on Pyongyang.

Sanctions relief is an urgent priority for North Korea, which is seeking to boost economic growth under a policy shift, announced in April last year, from the so-called "byongjin" efforts of pursuing both economic and nuclear development.

North Korea's media have slammed the U.S. for clinging to sanctions and pressure and criticized South Korea for being dictated by outside powers and failing to take the lead in expanding cross-border exchanges.

Other demands in Kim's speech on Tuesday are an end to joint military drills between South Korea and the U.S. and for no foreign military strategic assets to be brought onto the Korean Peninsula, which appears to be in line with the North's calls for denuclearization of the entire peninsula, including South Korean territory.

The North Korean leader, however, did not unveil any additional denuclearization steps, which Washington might have wanted to hear more than others.

All eyes are now turning to how Washington might react to Kim's address.

Shin Beom-chul, a senior fellow at the Asan Institute for Policy Studies, a private think tank, said that the U.S. might feel pressure from the possible "new way" the North Korean leader threatened in his speech.

"Kim pointed out that the action that the U.S. has taken is insufficient and called for corresponding measures, such as sanctions relief, in a preemptive manner, which could make Washington feel burdened," he said.

Others said that Kim appeared to have cautiously chosen his words so as to not provoke the U.S. and keep alive the prospects for nuclear talks.

"There is little criticism you can find in the speech trained on the U.S.," Yang Moo-jin, a professor at the University of North Korean Studies, said. He also saw the "new way" remark as intentionally toned down to express Pyongang's frustration with existing sanctions.

Trump tweeted on Christmas Eve that progress is being made on the issue of North Korea and that he is looking forward to a second meeting with Kim. He made the comments after receiving a briefing from his top nuclear envoy, Stephen Biegun, who had returned from a trip to Seoul.

Trump earlier expected that a second summit with Kim could take place in January or February.

Kim had raised optimism about the way forward by sending a surprise year-end greeting letter to Moon over the weekend in which he renewed his commitment to denuclearization and pledged to continue to work together for peace and prosperity on the Korean Peninsula in the new year.