SEOUL, Jan. 2 (Yonhap) -- Hyundai Motor Co. and its affiliate Kia Motors Corp. said Wednesday that they aim to sell 7.6 million vehicles this year by reviving sales in major markets, such as the United States and China.

This year, Hyundai and Kia came up with a combined annual sales target that appears to be conservative as they are widely expected to miss sales targets for a fourth straight year through 2018 due to weaker than anticipated demand in the two biggest auto markets.

In 2019, Hyundai and Kia will strive to sell 4.68 million vehicles and 2.92 million units, respectively, in global markets, the companies said in separate regulatory filings.

They targeted sales of 7.55 million vehicles for the whole of 2018, but sales from January to November reached 6.75 million, or 89 percent of the target. December figures are due to be released later Wednesday. 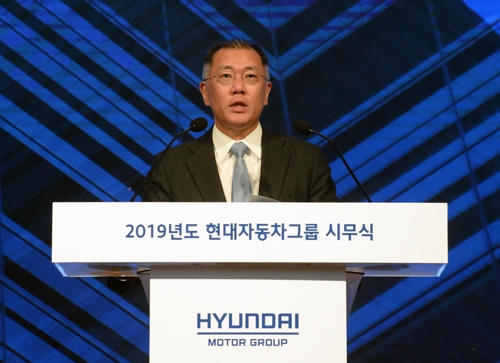 To drive up sales, Hyundai Motor Group plans to launch 13 new and upgraded models, including a luxury Genesis sport utility vehicle, in the U.S., China and other emerging markets this year, the company said in a statement. No details were given about the models.

"We are planning to launch the luxury Genesis models in China (later this year) and then in Europe. And we are beefing up our SUV lineup to strengthen our global brand awareness," the group's Executive Vice Chairman Chung Eui-sun said in his first speech for the new year to employees.

The 48-year-old heir apparent of the group is in the process of taking over the country's second-biggest conglomerate by assets after Samsung Group. His 80-year-old father Chung Mong-koo has been at the helm of the group since 2000.

As for challenges ahead, he cited the slowing global economy and the spread of protectionism in major trading partner countries as uncertainties.

To achieve growth amid uncertainties and competition with rivals, Hyundai Motor Group is targeting the development of 44 hybrid, all-electric and hydrogen fuel cell electric models by 2025 and aims to sell 1.67 million units of the models in the same year, he said.

In that vein, Hyundai plans to launch a pilot service of its autonomous robo-taxi cars in Korea by 2021 and to continue to partner with global leaders to develop autonomous driving technologies.