SEOUL, Jan. 2 (Yonhap) -- Small business owners in South Korea may face a bumpy road again this year despite a series of government measures to support them, industry watchers said Wednesday.

The year 2018 was one of the worst years for self-employed people in Asia's fourth-largest economy as they were hit hard by flaccid consumer spending, tougher competition, soaring rents, rising labor costs and higher interest rates.

Amid worsened business conditions, more than 1 million self-employed people are estimated to have closed up shop in 2018.

At the end of November 2018, the number of self-employed people stood at 5.63 million, accounting for about 25 percent of the total workforce.

The situation is not expected to improve this year as such individuals are still dogged by those unfavorable conditions, especially a rise in the country's minimum wage. 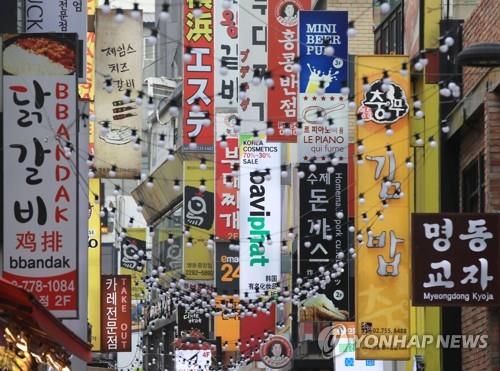 Following a 16.4 percent spike last year, South Korea has raised its minimum wage by 10.9 percent for this year to 8,350 won (US$7.47) per hour, drawing strong objections from small merchants, who complain of higher labor costs amid an economic downturn.

Critics also contend that the increase is hurting part-time jobs and weighing down on the local economy.

According to a recent survey of 1,204 small shop owners nationwide, nearly 17 percent said they have cut the number of employees due to the increased minimum wage.

Reflecting their pessimism, the future consumer sentiment index for South Korea's self-employed entrepreneurs came to 59 in December, down sharply from 84 in January last year, according to the Bank of Korea.

A reading below 100 means pessimists outnumber optimists, while a reading above the benchmark means the opposite. 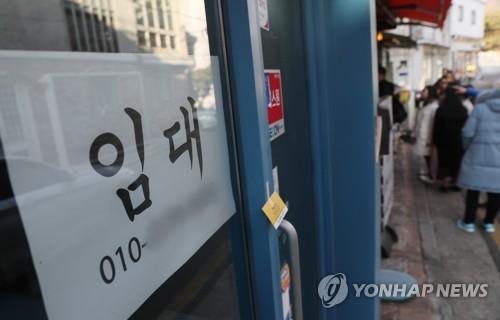 The revised regulation calls for including legally mandated holiday hours, such as Sundays, in the calculation of the minimum wage beginning in 2019.

Small business owners and employers' bodies argue the rule change will cause additional financial burdens on them, forcing many of them to violate the law and resort to expedient measures.

The Korea Federation of Micro Enterprise has lodged a formal complaint against the Cabinet approval of the minimum wage amendment with the Constitutional Court.

"Given the inclusion of holiday benefit, the hourly minimum wage will soar to 10,030 won. It will come as a double whammy for small shop owners as the nation's minimum wage has risen by double digits for two years in a row," a federation official said.

Against such a backdrop, the Moon Jae-in government has come up with measures for the self-employed five times. The latest steps came in late December and included providing low-rate loans to self-employed shop owners.

The government is widely expected to put efforts to revitalize small shops on the front burner this year, but experts say those efforts should go hand in hand with its overall economic policy in order to make them effective. 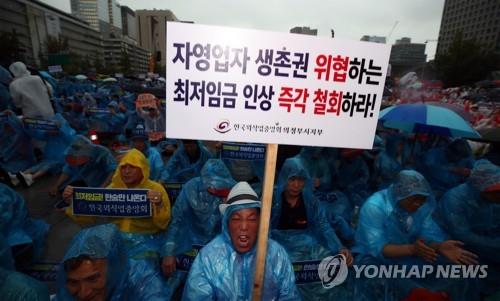